One of Oprah Winfrey's most trusted aides is headed west to serve as chief creative officer for OWN: the Oprah Winfrey Network -- a move that's raising questions about whether Winfrey is planning to give up her syndicated daytime talkshow. 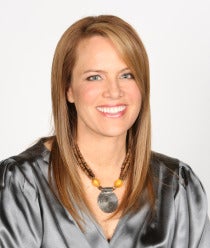 Lisa Erspamer, currently co-executive producer of "The Oprah Winfrey Show," will move from Chicago to Los Angeles in January for her new gig. Reporting to OWN chief executive officer Christina Norman, Erspamer will be charged with bringing "an injection of Oprah's DNA into OWN," Norman said.

But already, industry insiders are wondering if Erspamer's move could be an early hint of Winfrey's OWN next career move.

The talk queen has said she'll decide by year's end whether to continue her syndicated talk show beyond next season, when her deal with CBS expires.

But Erspamer is known to be one of Winfrey's most trusted producers. Shifting her to Los Angeles could be seen as a sign that Winfrey is getting ready to wind down her syndicated show -- and possibly shift her TV output to OWN.

Executives at Winfrey's OWN partner, Discovery Communications, have gotten into trouble for hinting that Winfrey might be close to giving up daytime for cable. But their remarks have led to speculation that Winfrey's long-term game plan is to put most of her TV energies -- including any type of regular Winfrey-hosted show -- into OWN.

Until Winfrey speaks, of course, this is mostly just rumor and supposition. Because she's not based in Hollywood, and since she keeps a very tight circle of advisers, it's difficult to find out just what Winfrey's plans are until she announces them.

Reps for Winfrey and her HARPO Prods. didn't respond to a call requesting comment Wednesday.

Meanwhile, what is known is that Erspamer will serve as Winfrey's eyes and ears at OWN, but without any extensive portfolio. She will not have any direct reports.

Instead, it's expected she'll be a creative guru for the channel, helping to bring Winfrey's vision to L.A. Another Oprah confidante, best bud Gayle King, serves a similar role at O: The Oprah Winfrey Magazine.

“Lisa has been a creative superstar," Winfrey said. "She’s brought fire and force to many of the incredible shows we’ve done over the years. I value her passion and sensibilities and trust her instincts and judgment. I know she’ll be a great fit with the OWN team."

Erspamer has been at Harpo for more than 15 years and was elevated to her current post in 2006.

Today's announcement comes a few weeks after TheWrap broke the news that Discovery vet Debbie Myers was joining OWN as interim general manager.