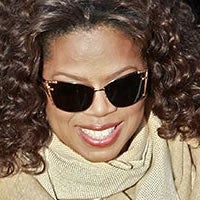 Oprah Winfrey has been a very busy woman at this week’s inaugural festivities.

Sunday night, the talk show queen attended a private buffet dinner at Blair House with now-President Obama, according to Entertainment Tonight. When approached by the outlet, Oprah pal Gayle King exclaimed "You guys are good! How did you hear that? Boy you people are good."
The next day, at the taping of her show at the Kennedy Center, Oprah got a delicious secret out of Jill Biden, the new Vice-President’s wife, who was appearing with her husband.  Apparently, Obama offered Joe Biden the choice of either the Vice-Presidency OR Secretary of State.  Quote: 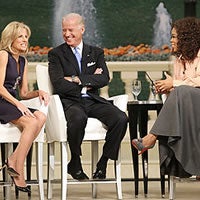 JILL BIDEN (to Oprah): Joe had the choice to be secretary of state or vice president.
(Pause)
JOE BIDEN: Shhhh.
JILL BIDEN: O.K. He did.
JOE BIDEN: (laughs, hugs her)
JILL BIDEN: Well…
JOE BIDEN: That’s right. Go ahead.
Of course, the Obama transition team has since denied that any formal offer other than the Vice-Presidency was made, although they acknowledge that both positions were "possibilities."
Then, on Inauguration Day itself, Oprah shared the VIP section with such stars as Denzel Washington and Caroline Kennedy.  The woman who anointed Obama in Iowa as the next President of the United States declared "it means everything. It means everything and more and everything. It’s like no moment I ever expected to experience. I can’t say anything that hasn’t already been said. It’s beyond. It’s sacred. You know I feel both celebrative and like celebratory and also very sobered by it. That’s how I feel."
x
Looks like you're enjoying reading