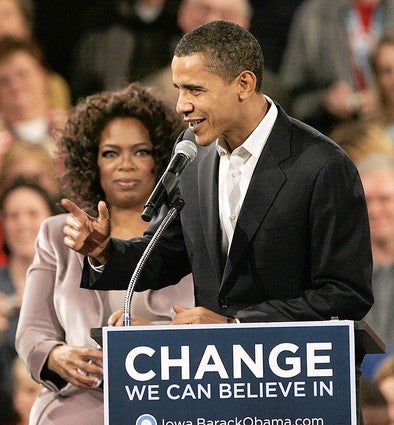 Winfrey, who recently made waves by announcing she would be stepping down from her talk show perch in 2011, has had a year of high profile interviews with everyone from Whitney Houston to Sarah Palin. For a special holiday episode, she’s snagged the biggest "get" in the free world.

Oprah announced that she will stop by the White House, to visit President Obama and the First Lady as they prepare for their family’s first Christmas there. The episode is entitled “Christmas at the White House: An Oprah Primetime Special,” and will hit airwaves on December 13 from 10:00-11:00 p.m., ET on ABC.

The president owed her one. Oprah was widely credited with helping Obama achieve early primary victories after she broke with her usual policy of not making endorsements to throw her weight behind  the freshman senator’s quest for the Democratic nomination.

The hour-long special will include a one-on-one conversation with the President, marking the first time Oprah has interviewed him since he took office, as well as an exclusive sit-down interview with the First Couple. The special will showcase behind-the-scenes preparations as the White House gets ready for the holiday season.