Oprah Winfrey is owning up to the off-screen drama she foresees from her drama series “Greenleaf,” preempting inevitable backlash a month ahead of its debut.

Dubbed “‘Dynasty’ in a church'” by one TV reporter and inevitable comparisons to “Empire,” the OWN TV drama focuses on a sprawling, uber-wealthy, scandal-suppressing, unfaithful, feuding family that runs a corporate mega-church in Memphis, Tennessee.

When asked about the comparison to the ’80s cult soap opera at an advance screening of the first episode for industry and media at Soho House in West Hollywood Wednesday night, Winfrey had three words. “We’ll take it.” 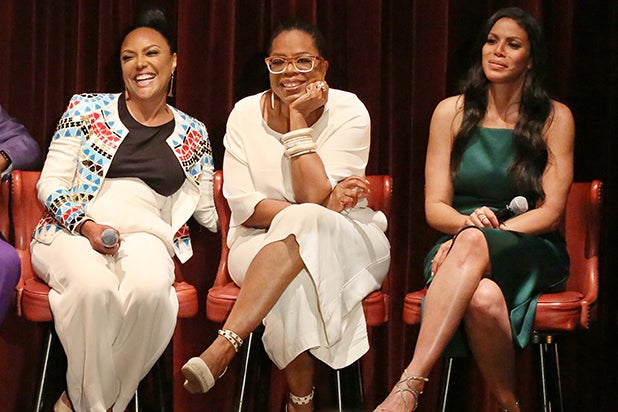 The event, which took place a full three weeks before the show’s official splashy red carpet premiere, drew the show’s principals, including creator Craig Wright (“Lost,” “Six Feet Under”) and Winfrey herself,.

All seem prepared for criticism of the show’s mostly African American cast portraying less-than-holy characters garbed in a holier-than-thou world of false righteousness.

Timely secular trending topics ground the story in modern times, from racially motivated police shootings of young black men and angelic teens with prescription drug snorting habits, to Tennessee Powerball winners — and even a scene dedicated to couples who co-watch “The Bachelor” in bed.

“This is just another platform [TV drama] to able to do that, in a really collaborative way,” Winfrey said.

There’s one man Winfrey does not want seeing himself reflected in the picture: Bishop T.D. Jakes.

The lead character in the show, a villainous patriarch who presides over servant-hosted dinner parties like “Downton Abbey’s” Lord Grantham, is named Bishop James Greenleaf. Meanwhile, the real-life media-savvy Jakes runs a 30,000-member megachurch in Dallas.

“The only resemblance is that our main character is named ‘Bishop’ and your name is ‘Bishop,'” Winfrey recalled assuring Jakes on a preemptive phone call.

“From my lips to your ears, ‘I, Oprah Winfrey, am not going to do anything that disrespects the church,” Winfrey says she told the pastor. “I am sitting where I am today because of the black church.”

Jakes, who has a syndicated talk show arriving this fall, had a clean secular response: “Send me a tape.”

“Greenleaf” will premiere Tuesday, June 21 at 10 p.m. on OWN before settling into a regular Wednesdays at 10 p.m. time slot.

Watch some of the most A-list commencement addresses

"Ghostbusters" director Paul Feig gave a nugget of sage advice to the grads of USC's School of Cinematic Arts on May 13: Respect your actors, respect your colleagues, respect your audience, and above all... "Don't be an a--hole."
View In Gallery