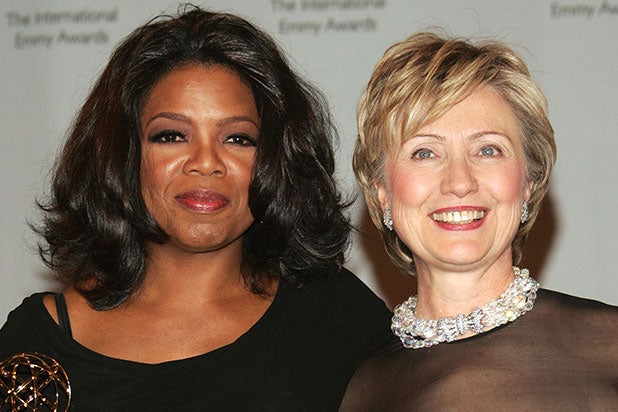 Oprah Winfrey has endorsed Hillary Clinton to become the next President of the United States.

“I really believe that is going to happen,” Winfrey  told “Entertainment Tonight” on Wednesday. “I’m with her.”

Winfrey added, “Regardless of your politics, it’s a seminal moment for women. What this says is, there is no ceiling, that ceiling just went boom! It says anything is possible when you can be leader of the free world.”

Last week, current President Barack Obama officially endorsed Clinton, saying he’s “fired up and cannot wait to get out there and campaign with Hillary.”

“I don’t think there’s ever been someone so qualified to hold this office. She’s got the courage, the compassion and the heart to get the job done,” Obama said in a video, right before using Clinton’s slogan, “I’m with her.”

According to the New York Times, Winfrey didn’t endorse Clinton in the previous election — in 2007, Winfrey supported Obama over Clinton although she didn’t have “one negative thing to say about Hillary Clinton.”

Hillary Clinton had far more celebrity supporters than Donald Trump, but his 37 celebrity fans turned out to be the ones who backed the winning candidate. Here are Trump's celebrity fans.