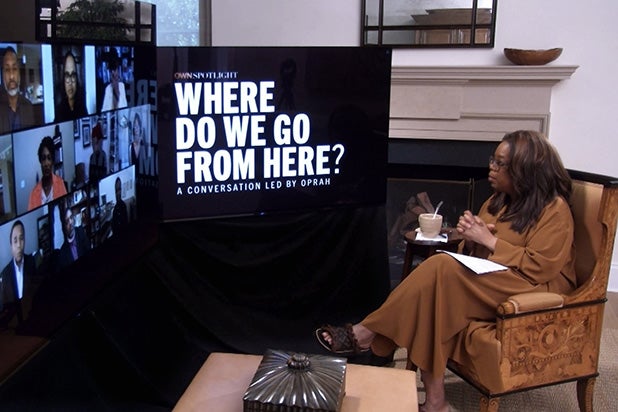 Oprah Winfrey’s special “OWN Spotlight: Where Do We Go From Here?” drew 10.9 million TV viewers across 17 Discovery, Inc.-owned networks. That linear viewer tally counts both the initial 9 p.m. airings of Part 1 on Tuesday and Part 2 on Wednesday, plus repeats, according to Live + Same Day data from Nielsen.

Together, the two live simulcasts combined to reach 7.3 million unique viewers. To date, the special has added 6.7 million via views on YouTube and Facebook, racking up a total of 17.6 million viewers across all platforms.

Per Discovery, “The special featured Oprah Winfrey as she spoke directly with a range of Black thought leaders, activists and artists about systematic racism and the current state of America. The in-depth conversations offered insights and tangible plans to answer the questions “What matters now?” “What matters next?” and “Where do we go from here?”

Resources and organizations discussed on the special are available on Oprah.com/OWNSpotlight.

“OWN Spotlight: Where Do We Go From Here” was produced by Winfrey’s OWN, with Winfrey and Tara Montgomery executive producing.