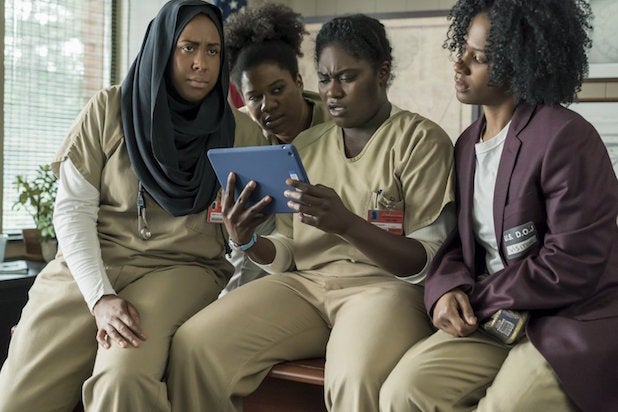 The sixth season of “Orange Is the New Black” hits Netflix Thursday at midnight PT, and TheWrap is here to give you a quick refresher on where the drama series left off.

In case you forgot, the entire fifth season of “OINTB” takes place over the course of just a few days, as a riot breaks out at Litchfield after the death of Poussey (Samira Wiley).

In the finale, titled “Storm-y Weather,” CERT members get ready to break down the prison doors after days of negotiating terms and demanding the release of hostages the prisoners had taken. They’re going in with prison doors, smoke bombs and batons, handcuffing the inmates as they storm through the prison. There, they discover the dead CO Thomas Humphrey, who was shot by Daya (Dascha Polanco) in the first episode of the season. They start escorting the prisoners out of the prison, including Maritza (Diane Guerrero) and Flaca (Jackie Cruz), who are excited about the attention they are getting from their fans given the success of their beauty channel on YouTube.

Piper (Taylor Schilling), Red (Kate Mulgrew), Alex (Laura Prepon), and more inmates have been hiding out in Freida’s (Dale Soules) bunker that she crafted out of swimming pool that was never filled with water. Also, remember that Piper proposed to Alex, who said yes.

Desi Piscatella (Brad William Henke), who went into the prison on his own after dark after receiving a text from the inmates through Humphrey’s phone, is also in the bunker after he held Red, Piper, Alex and the other inmates hostage and used a knife to cut off Red’s hair and broke Alex’s arm. In the bunker, Freida knocked him out with a homemade poison dart. When Nicky (Natasha Lyonne) brings Taystee (Danielle Brooks), Black Cindy (Adrienne C. Moore) and Suzanne (Uzo Azuba), who was passed out on lithium for a while, to the bunker to wake Suzanne, they see Piscatella tied up and Taystee takes Freida’s gun and points it at Piscatella, blaming him for Poussey’s death. Red then releases Piscatella and orders him to leave without touching anyone. However, he is shot and killed by the CERT officers that have raided the prison, who couldn’t see who was walking down the halls through the smoke bombs.

At the end of the episode, we see the inmates being loaded onto buses, presumably heading to new prisons. Flaca and Maritza are separated, while the remaining inmates that are still hiding out in the bunker link arms when the doors are blown in.

Other quick notable happenings to get you back on track: Leanne (Emma Myles) and Angie (Julie Lake) set fire to all the inmates’ records. Lorna’s (Yael Stone) baby daddy Vince actually turned up and professed his love to her with the help of Nicky. Pennsatucky (Taryn Manning) escaped the prison through the hole in the fence, while Gloria, who was leaving to go visit her son after his brain surgery, didn’t make it through.

What will happen to the ladies in the bunker? Will the next season bounce around to different prisons because the inmates have been split up? Is this the end of Litchfield or will we return? Overall, the show is heading for a major reset. We’ll find out when “Orange Is the New Black” returns Thursday night PT.