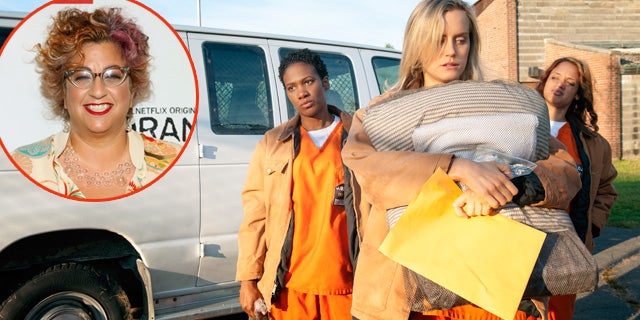 Jenji Kohan acknowledges that there is a through-line between her housewife-turned-drug dealer Nancy Botwin (Mary-Louise Parker) from Showtime's "Weeds," and the girl-next-door-turned-jailbird Piper Chapman (Taylor Schilling) on Netflix's "Orange Is the New Black."

"I think [they're] certainly from a similar socioeconomic background," the series creator said on a press call. "They're both hot. They both have that sort of adventure junkie dream in them where they pursue danger."

"What attracts me is how they walked that line and the push-pull between those sides of them, the good girl and the part of them that wants to be the rebel and feel that excitement and escape their stereotype," she continued.

Also read: 'Orange Is the New Black' Creator on Getting Renewed Ahead of Debut: 'Netflix Has Balls' Based on the memoir of the same name by Piper Kerman, "Orange Is the New Black" follows engaged Brooklyn soap artisan Piper Chapman (Schilling), whose lesbian relationship with drug-runner Alex (Laura Prepon) catches up with her a decade later and results in her arrest and year-long detention in a federal penitentiary.

"I'm deeply fascinated by flawed characters," Kohan elaborated. "And, you know, the more deeply flawed, the better. I think underground economies are a great place to find them. And I think we all have the bad girl or bad boy in us. And it’s fascinating to me how it’s handled."

Aside from seeking insight from Kerman on the series – "[the guards] are not big enough a-holes," Kohan pointed out as one of the author's biggest complaints on the series – the creator said she and the show's writers did some major research into prison culture, including visits to the female-only California Institution for Women in Chino, Calif.

"We had speakers," she said. "We have read tons of supplementary material, books, articles… We have dipped ourselves in prison culture and lore and media, and the experience – and people.  And we really want to be as informed as possible."

"There are things that I had never thought about in my life," Schilling said of immersing herself in Piper's prison experience.

And like Nancy Botwin's own prison stint on "Weeds," lesbianism plays a central role in the lives of "Orange's" inmates. Kohan doesn't like to limit that expression in those terms, stating her belief in a fluid theory of sexuality.

"And when you're in prison, you need that expression. You need your sexuality, and if the only people there are women, you might express yourself with other women. I think certain people in the prison are absolutely lesbians and I think others who might be gay for this day. But more than an exploration of lesbianism, I think it’s just about an inherent human need to express yourself sexually."

All 13 episodes of "Orange Is the New Black" premieres Thursday on Netflix.