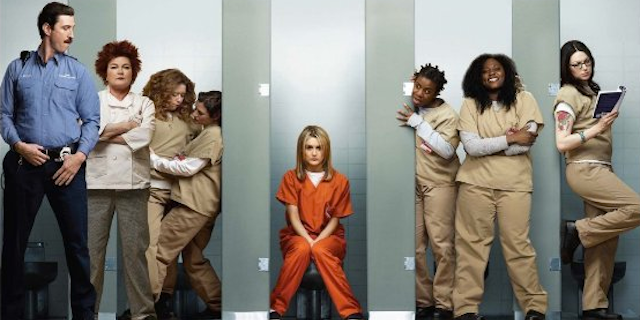 Netflix released the first 13 episodes of "Orange Is the New Black" to subscribers on Thursday, and if viewers enjoy it as much as the reviewers are, then the company's decision to renew the series for a second season last month will prove to have been a wise one.

Netflix's fifth original series, orchestrated by "Weeds" mastermind Jenji Kohan, is based on Piper Kerman's memoir of the same name. Taylor Schilling ("The Lucky One") stars as a preppy blonde who is thrown into federal prison after helping her ex-girlfriend, played by Laura Prepon, deliver a suitcase full of drug money.

Also read: 'Orange Is the New Black' Creator: Even in Prison, 'You Need Your Sexuality'

Entertainment Weekly's Melissa Maerz gave the new comedy a B+, praising its ability to score big laughs, while eliciting sentimental reactions as Schilling's character meets a diverse cast of characters stuck in the slammer with her.

"It's very funny and occasionally quite moving, with a crackerjack cast and provocative insights into the way that race and power and magical chickens function in the penal system," Maerz wrote.

Curious about the chicken reference? Perhaps Maerz's recounting of the joke provides audiences with a sample of the humor that awaits.

"In one episode, Piper spots a chicken outside, and the prison's chef (Kate Mulgrew), who thinks the chicken is magic, complains that the black inmates will catch it before she can. 'Why?' Piper asks. 'Because all black people love chicken?' Retorts the chef: ''Don't be racist! Because they're all on heroin. Somebody's been telling them there's heroin in the chicken,'" Maerz explains, before concluding: "It's totally backward logic, but in a world where good people get locked up and magical chickens fly, it makes perfect sense."

USA Today's Robert Bianco seems to be in the same boat as Maerz, and was pleasantly surprised by series' skillful mix of comedic and dramatic moments.

"What you get from Jenji Kohan's (Weeds) unexpectedly affecting new 13-episode series is a true rarity: a deft mix of comedy and drama in which the prison feels like a real place and the women are actual people, rather than a thinly veiled excuse to stage catfights, lesbian fantasies and sexual assault," Bianco wrote. "As with 'Weeds,' Kohan is telling the story of a white, middle-class woman who must suddenly cope with career criminals, but this time there's a sad undertone to the story that makes the tale seem that much more relatable."

"'Orange' has graphic scenes that aren’t for kids. But they aren’t played for cheap gags, either, and that attitude serves the production well," Hinckley wrote. "With Schilling in top form, this 'Orange' tastes fresh."

New York Times critic Mike Hale was also impressed by the comedy, noting the new series "has the soul of a sitcom." Unlike others, however, he was not impressed by the conflict facing Schilling, and put it on par with "a teen drama" like the CW's "Gossip Girl."

"When it's not being funny, though, 'Orange' (a reference to the color of the jump suits new inmates wear) can seem inconsequential," Hale wrote. "Chapman’s cringing process through the penal system is always amusing, but the other inmates' stories – and there are a lot of them – tend toward big-house clichés, right down to lines like 'You need to man up' and 'Hope is a dangerous thing.'"