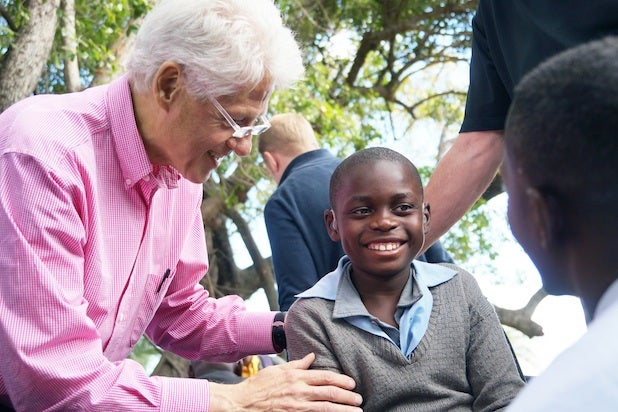 OWN will highlight the international charity work against hearing loss and the prominent figures who take part in its activities.

The network has ordered 10 episodes of the series titled “Operation Change,” which debuts Monday, June 23 at 10 p.m.

“Operation Change” highlights the work of Bill and Tani Austin and their son Steven Sawalich‘s Starkey Hearing Foundation, a nonprofit organization that provides hearing aides to those in need.

“Our family has always found fulfillment in helping others,” said Sawalich in a statement.

He continued, “Through our charitable efforts, we have seen firsthand the needs and challenges people face all over the world. With the help of some of our celebrity supporters and local partners, ‘Operation Change’ chronicles how together we can make a difference in the lives of people around the globe. We are thrilled to share this emotionally-compelling series with OWN viewers.”

Over the season, “Operation Change” follows the organization to Haiti, Colombia, India, South Africa, Israel and Palestine, among other destinations.

See OWN’s overview of the series below:

Operation Change: Haiti
Three years after one of the most horrific earthquakes ever recorded, the team comes face to face with a nation struggling to survive. In the tent cities of Port-au-Prince, Haiti, lives a man who ties himself to his children at night because he fears they will be kidnapped. In Jacmel, a woman is still reeling from the death of her son, whom she lost shortly after the earthquake. The team works with fashion designer Donna Karan, actress Maria Bello, entrepreneur Bill Rancic, and non-profit organizations including World Wide Village, We Advance (co-founded by Bello) and Karan’s Urban Zen.

Operation Change: Colombia
The team immerses themselves in one of the most dangerous slums in Bogota, Colombia. They focus their efforts on building a community center out of plastic bottles for displaced refugees, who fear for their lives at the hands of guerrilla militia. Here, the team works with former President Bill Clinton, actress Marlee Matlin and the non-profit organization Nukanti Foundation for Children.

Operation Change: India
This episode explores the millions of orphans who face abusive households and flock to India’s large cities, only to become victims of sex trafficking and child slavery. While these children beg, borrow, and steal for survival, the team struggles to educate them before they become prey to the ruthless life of the streets. The team works with His Holiness the Dalai Lama and the non-profit organization Salaam Baalak Trust.

Operation Change: Lebanon
Beneath the bombed-out shell that hides the ‘Paris of the Middle East,’ thousands fear that tomorrow will never come. As the team fights for sustainability, they join local activists to build a skate park and save an endangered community outlet on the brink of being shut down. The team works with non-profit organizations including Ayadina and Lebanese Skateboarding Association.

Operation Change: Malaysia
In a booming Asian metropolis, one segment of the population has been deemed a burden by society, and the team fights to change perceptions and create opportunities, while discovering just how able the disabled really are. Here, the team works with Sir Elton John, World Champion Boxer Manny Pacquiao and the non-profit organization The Beautiful Gate Foundation.

Operation Change: Israel and Palestine
Trapped on the border of two warring territories, volunteers experience firsthand the tension between Israel and Palestine. With the help of peace activists from both sides, they strive to cultivate understanding among children and those whose lives are constrained by a wall. The team works with singer/musician/actor Harry Connick, Jr. and the non-profit organization The Parents Circle Families Forum.

Operation Change: Tanzania
The last remaining traditional tribe of Africa, the Maasai, is battling lions and hyenas for one resource: water. Far removed from modern-day conveniences, volunteers work to obtain a sustainable supply of water and are supported there by football players Greg Jennings, Tommie Harris, Larry Fitzgerald, Ray Lewis and the non-profit organization WorldServe.

Operation Change: Ethiopia
More than one million Ethiopians suffer from an unsightly, yet preventable condition, Mossy Foot disease, which renders them outcasts from society. Providing assistance and education, Bill, Tani and Steven work with the non-profit organization Mossy Foot Foundation to overcome the fear and prejudice surrounding this disease.

Operation Change: Papua New Guinea
In the land of the unexpected, the team travels into a jungle to help a village plagued by tribal warfare fueled by the drug trade. They work with the non-profit organization Touching The Untouchables.