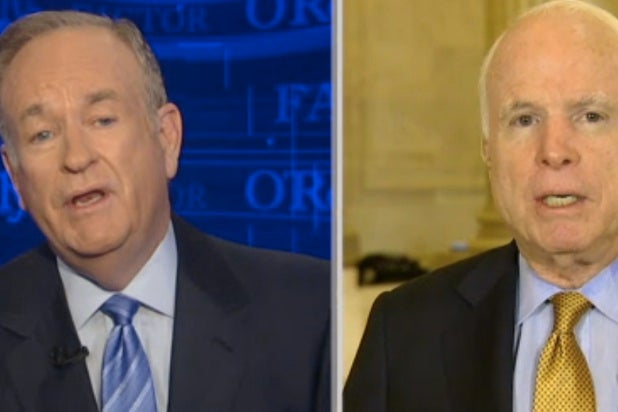 McCain, who was held prisoner of war and tortured during the Vietnam War, told O’Reilly that torturing prisoners to the point of sleep deprivation, rectal feeding, and other reported measures will get them to say just about anything–most of it not accurate intelligence.

“We never, ever, captured a prisoner, took him back to a place, a German or a Japanese, and practiced these torture methods on them” McCain said. O’Reilly countered, “we shot them when they run forward with their hands up, we put a bullet in their eyes.”

The two began to talk over each other, causing O’Reilly to snap, “It’s my job to interrogate you and ask the questions…wait, wait, Senator,” O’Reilly said as McCain cut him off.

The interview ended a little more pleasantly, with O’Reilly crediting McCain for his past experience.

Also read: Meghan McCain Rips Sarah Palin's Online Channel: 'I Got All My Sarah Palin I Need for One Lifetime' (Video)

“We have to respect your opinion because you went through it, and you’re a patriot, but it’s my job to interrogate you without throwing any water on you, and I want to wish you a very Merry Christmas,” O’Reilly said.

“No, but your pulling out my fingernails,” McCain joked back.

On Wednesday, CIA Director John Brennan spoke at a press conference responding to the release of the Democratic-written CIA torture response. Brennan acknowledged there were some “enhanced interrogation programs” that went too far, but overall, defended the agencies post-9/11 practices for keeping the country safe.

Cable news networks all covered the press conference in the afternoon and analyzed it in primetime.

Watch O’Reilly and McCain square off below: