The heirs of the original writer of a magazine article that inspired the 1986 film “Top Gun” sued Paramount Pictures, saying the studio willfully ignored a copyright claim filed in 2018 – before making the high-flying sequel starring Tom Cruise.

Ehud Yonay wrote an article titled “Top Guns” for the relatively unknown California Magazine in 1983, only to see it made into a blockbuster film three years later. He was rightfully credited as the “story-by” author at the time, and still is. 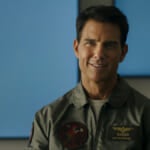 According to his lawsuit, filed Monday in U.S. District Court for central California by Shosh Yonay and Yuval Yonay, the copyright was legally re-claimed in 2018, a statutory termination triggered after enough time had passed. The suit says the “Top Gun” sequel, a direct derivative of his original story, is in violation of that claim, which Paramount ignored.

“These claims are without merit, and we will defend ourselves vigorously,” a Paramount spokesperson told TheWrap.

The lawsuit repeatedly references the magazine article’s “cinematic” writing style, taking an “otherwise dry topic” and making it into a tale of charismatic flyboys, including details of their personal lives. That could be significant, as the facts of the article itself are not subject to copyright.

Editor’s Note: An earlier version of this story incorrectly identified Ehud Yonay as the plaintiff.