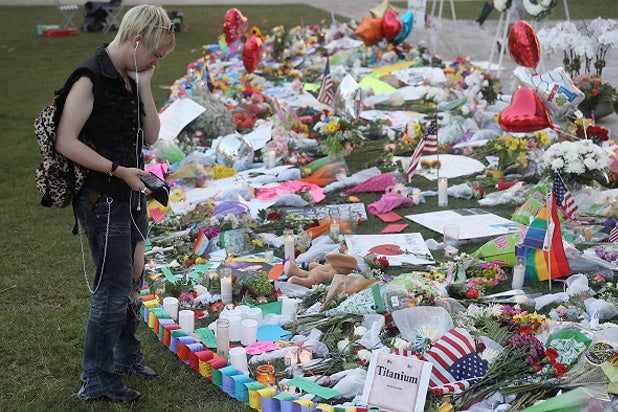 Joshua Knight pays his respects at a memorial in front the Dr. Phillips Center for the Performing Arts to the victims of the Pulse gay nightclub shooting where Omar Mateen allegedly killed 49 people on June 14, 2016 in Orlando, Florida

Last year’s Frontline documentary about the NRA, “Gunned Down,” gave a very simple explanation for why lawmakers don’t pass sweeping gun control legislation: Most of us stop thinking about guns not long after a mass shooting. But the NRA never stops fighting.

How long does it take us to forget about mass shootings? According to our Google search histories, about a month.

There have now been at least 41 mass shootings since 2007 in the United States, according to a data set collected by Mother Jones. Americans remain shocked by the horrific killing of 49 people at a gay nightclub in Orlando. But the news cycle is already moving on to other stories, like an alligator attack in that same city.

Also Read: Guess How Many Republicans Senators Said 'Gay' or 'Guns' After Orlando

Here are some charts illustrating how quickly we stop thinking about mass shootings — at least to the extent that our Google searches reflect our private thoughts.

“Somehow this has become routine,”President Barack Obama said following a shooting at the Umpqua Community College in Oregon last year. “The reporting is routine. My response here at this podium ends up being routine. The conversation in the aftermath of it. We’ve become numb to this.”

Also Read: Homophobic Pastor on Orlando Shooting: 'The Tragedy Is That More of Them Didn't Die'

“I hope and pray that I don’t have to come out again during my tenure as President to offer my condolences to families in these circumstances,” he added. “But based on my experience as President, I can’t guarantee that. And that’s terrible to say.”

Here are the Google trend lines for recent mass shootings, broken out individually (you can click on each image to be directed to the interactive graph on Google Trends):

Fourteen people were killed and 22 injured in San Bernardino in a Dec. 2, 2015 shooting. Searches peaked from the date of the incident to Dec. 5, but Google Trends indicates a sharp decrease beginning Dec. 6.

The Charleston church shooting took place on June 17, 2015, and took the lives of nine people. But four days later, on June 21, interest plunged. By the next month, search interest fell close to the baseline.

Twelve people were killed following a deadly shooting at the Navy Yard in Washington, D.C., on Sept. 16, 2013. But by Sept. 22, interest began to drop.

The shooting took the lives of 27 people at an elementary school in Newtown, Connecticut. There are notably more spikes in interest following the weeks immediately following the incident on Dec. 14, 2012 — perhaps in part because so many of the victims were so young, and parents and others did their best to keep the tragedy in the public’s mind.

Thirty-two people died in the April 16, 2007 shooting. It took only until April 22 for search interest to drop.