Oscar voters, check your mailboxes: Ballots for the 82nd Academy Awards were mailed out today.

Completed ballots are due by Tuesday, March 2. The winners will be announced during the Oscarcast on Sunday, March 7.

This being the Oscars, and therefore of interest to the news  media, the ballot mailing was accompanied by one of the odder media events of the awards-season calendar, a ceremonial photo op in which PricewaterhouseCoopers partners Rick Rosas and Brad Oltmanns, the heads of the Oscar team, wheeled a cart bearing all 5,777 ballots into the lobby of the Academy’s Beverly Hills headquarters. 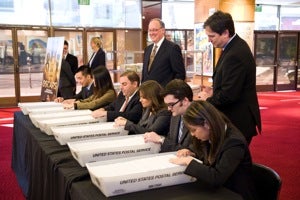 With AMPAS president Tom Sherak looking on, seven trays of ballots – out of a total of about 20 – were placed on a long table, where PwC staffers thumbed through them. The suit-clad staffers pretended they were actually doing something valuable, while Rosas and Oltmanns pretended to supervise. (AMPAS photo by Greg Harbaugh, right.)

In fact, of course, the ballots had all been stuffed, double-checked and sorted before they ever left PwC’s downtown offices, where they’ll eventually return when Oscar voters begin sending them back.

As an array of photographers shot the fake sorting, an Academy staffer’s walkie-talkie crackled. “We’re trying to get the trucks moved out of the loading dock for the mailing thing,” said a voice.

The trucks were indeed moved – because after the photographers had shot enough, Rosas and Oltmanns wheeled the cart out to a waiting postal truck parked behind the building. Sherak helped push, and asked if he could search through the trays and find his own ballot, rather than waiting for it to show up in the mail. The accountants said no.

When all the ballots were loaded, everyone waved and the truck departed for the Beverly Hills post office, accompanied by a supervisor to make sure the trip went smoothly. (Once there, they would continue to get special treatment, rather than being lumped in with non-Oscar-related mail.)

Then the empty card was wheeled back into the Academy lobby. A wheel fell off along the way.

The ballots, of course, have a new twist this year: whereas the Best Picture category used to sit in the middle of the ballot, tucked between Best Original Song and Best Sound Editing, it now sits at the front of the ballot, on a separate panel that can be easily detached (left).

And instead of asking members to check the box next to their first choice, it asks for them to rank each of the nominees, from first through 10th.

That way, Rosas and Oltmanns can do the Best Picture count themselves while other staffers handle the remaining categories. The move is necessary because with the preferential system used in that one category, a winner could conceivably be found the first time the ballots are sorted, and Rosas and Oltmanns are the only two PwC staffers who know the winners ahead of time.

(In the other categories, a small team of staffers divides up the ballots so that each person counts a portion but doesn’t see the final result. But dividing ballots doesn’t work with the preferential tally.)

It’ll take two or three days to count all the ballots, with the categories listed at the top of each page generally being decided first. That means Best Actor, Supporting Actress, Costume Design, Original Score and Sound Mixing will be the first races to have winners; Cinematography, Makeup and Original Screenplay will be the last.

And while Oltmanns admitted that you could write a computer program that would scan the ballots and do the calculations easily, even in the more complicated Best Picture category, he said that PwC felt quite comfortable doing things the old-fashioned way.

“The way we do it is very secure,” he said. “There’s nothing that can be hacked into, nothing that leaves the room. We sleep well at night.”

And the Academy got some publicity out of putting their ballots in the mail, which helps them sleep well at night.

Beverly Hills, CA — Final ballots for the 82nd Academy Awards® were mailed today (February 10) to the 5,777 voting members of the Academy of Motion Picture Arts and Sciences.

Completed ballots must be returned to PricewaterhouseCoopers by 5 p.m. Tuesday, March 2. Ballots received after the deadline will not be counted.

Following the tabulation of the votes, the winners’ names will be placed in sealed envelopes to be opened on Oscar Night®.

Academy Awards for outstanding film achievements of 2009 will be presented on Sunday, March 7, 2010, at the Kodak Theatre at Hollywood & Highland Center®, and televised live by the ABC Television Network beginning at 5 p.m. PT/8 p.m. ET. The Oscar presentation also will be televised live in more than 200 countries worldwide.