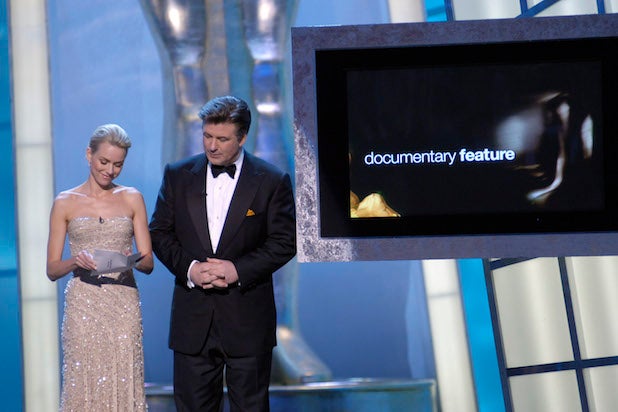 Members of the Academy’s documentary branch received a generous gift from AMPAS on Friday: 77 new films that had qualified in this year’s Best Documentary Feature category.

And it turned what had been a modest year for docs — with a total of 83 films included in June, July, August and September groups — into one in which the number of eligible films that voters would need to watch nearly doubled.

The Academy also promised voters in the branch to expect a final batch of films in early November — which, if it hits double digits, will set a new record in the category.

The previous high, set last year, was 170 films. With 160 already on the Oscar eligibility list and one additional (though likely small) batch yet to come, this year’s crop will give voters a lot of work to do before they vote in early December to narrow the field to a 15-film short list.

This year’s films are also coming later than usual; in the past, the largest group of films typically came in September, with the field being topped off by a smaller batch in October.

For years, doc-branch voters received periodic shipments of DVD screeners, which would start after new members were invited in June and would typically end in October. These days, though, the qualifying films are made available not on physical screeners, but for streaming on the Academy’s secure member website.

Each month beginning in June, branch members are sent an email detailing which films have been added to the site — and to ensure that every eligible film is seen, members are also randomly assigned certain films to watch.

(Each member is free to see any films not on his or her assigned list as well.)

June’s batch of films, which included “Won’t You Be My Neighbor?” and “RBG,” consisted of only 13 docs. July’s, including “Seeing Allred” and “Three Identical Strangers,” was made up of 19. August’s 18 included “The Bleeding Edge,” “Dark Money,” “Eating Animals” and “Generation Wealth.” September’s total jumped to 33, including “Crime + Punishment,” “Free Solo,” “Hal” and “The King.”

But with 77 films on a list members received near the end of the month, October dwarfed all of those. It brought in such significant Oscars contenders as “Fahrenheit 11/9,” “Hale County This Morning, This Evening,” “Hillbilly,” “Jane Fonda in Five Acts,” “Maria by Callas,” “Monrovia, Indiana,” “On Her Shoulders,” “Scotty and the Secret History of Hollywood” and “Tea With the Dames.”

It also included several films that have qualified in the doc-feature category by being submitted by their home country in the Oscars foreign-language race: Switzerland’s “Eldorado,” Palestine’s “Ghost Hunting,” Panama’s “Ruben Blades Is Not My Name,” Austria’s “The Waldheim Waltz,” Lithuania’s “Wonderful Losers: A Different World” and Ecuador’s doc/narrative hybrid, “A Son of Man.”

Along with the features, Oscars doc-branch voters are also given access to a group of short documentaries each month — and again, October’s group was the largest. A total of 124 short films have qualified so far, with 24 made accessible to voters in July, 18 in August, 18 in September and 44 in October.

Here is the complete list of films that have qualified and have been made available to Oscar doc voters so far. This is not the final list of eligible films, which the Academy will announce once the final group of films goes to members in early November.

“Bali: Beats of Paradise”
“Bathtubs Over Broadway”
“Better Angels”
“Believer”
“Bill Coors: The Will to Live”
“Bisbee ’17”
“The Bleeding Edge”
“Boom for Real: The Late Teenage Years of Jean-Michel Basquiat”
“Breaking Point: The War for Democracy in Ukraine”

“Daughters of the Sexual Revolution: The Untold Story of the Dallas Cowboys Cheerleaders”
“The Dawn Wall”
“Dark Money”
“The Distant Barking of Dogs”
“Divide and Conquer: The Story of Roger Ailes”
“Drug$”

“Garry Winograd: All Things Are Photographable”
“Generation Wealth”
“Ghost Hunting”
“Ghosthunter”
“The Gilligan Manifesto”
“The Gospel According to Andre”
“Grace Jones: Bloodlight and Bami”
“The Great Buster: A Celebration”

“Hal”
“Half the Picture”
“Hale County This Morning, This Evening”
“The Heart of Nuba”
“Hillbilly”
“The Homeless Chorus Speaks”
“Hondros”
“Howard”

“Jane Fonda in Five Acts”
“John McEnroe: In the Realm of Perfection”
“The Judge”

“The Last Race”
“Leaning Into the Wind: Andy Goldsworthy”
“Letter From Masanjia”
“Licu, A Romanian Story”
“Living in the Future’s Past”
“Liyana”
“Lots of Kids, a Monkey and a Castle”
“Love & Bananas: An Elephant Story”
“Love, Cecil”
“Love, Gilda”
“Love Is Tolerance – Tolerance Is Love – Make Tolerance Great Again”

“Samouni Road”
“Saving Brinton”
“Say Her Name: The Life and Death of Sandra Bland”
“The Road Movie”
“Science Fair”
“Scotty and the Secret History of Hollywood”
“Searching for Ingmar Bergman”
“Seeing Allred”
“The Sentence”
“Shirkers”
“Shot in the Dark”
“The Silence of Others”
“Sisters of the Wilderness”
“A Son of Man”
“Songwriter”
“Stan”
“Studio 54”
“Summer in the Forest”

“Tea With the Dames”
“That Summer”
“That Way Madness Lies … “
“They’ll Love Me When I’m Dead”
“This Is Congo”
“This Is Home: A Refugee Story”
“Three Identical Strangers”
“Transformer”
“Travel Ban”
“The Trial”
“Trust Machine”
“Triumph: The Untold Story of Perry Wallace”

“Under the Wire”
“United Skates”
“Up Down and Sideways”

“The Waldheim Waltz”
“We Could Be Heroes”
“Weed the People”
“What Haunts Us”
“What Lies Upstream”
“Whitney”
“A Woman Captured”
“Wonderful Losers: A Different World”
“Won’t You Be My Neighbor?”