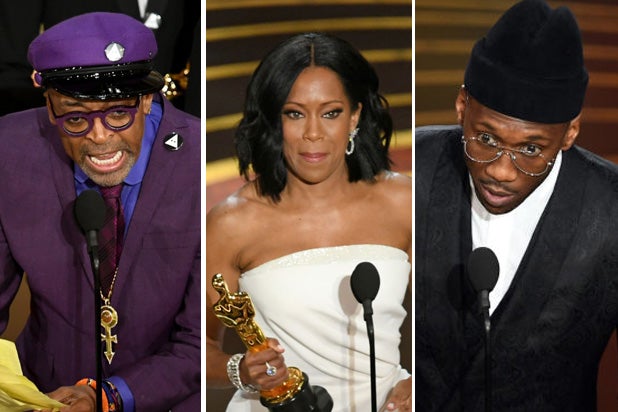 #OscarsSoWhite? Not this year, as a record seven black artists won Oscars on Sunday — topping the previous record of five set two years ago.

In addition, “Black Panther” costume designer Ruth Carter and production designer Hannah Beachler became the first black winners in their categories — as did Peter Ramsey, one of five winners for “Spider-Man: Into the Spider-Verse” as Best Animated Feature.

The previous record for black Oscar winners was set in 2016, when five black artists won: supporting actors Viola Davis for “Fences” and Mahershala Ali for “Moonlight;” documentary feature director-producer Ezra Edelman for “O.J.: Made in America;” and screenwriters Barry Jenkins and Tarell Alvin McCraney for “Moonlight.”

This year’s record comes just three years after the Academy failed to nominate a single nonwhite actor in any category, a snub that prompted the #OscarsSoWhite movement and a good deal of industry soul-searching — and a movement to expand and diversify the membership of the organization.

It was the third year of a concerted effort by the Academy to identify and invite more women and nonwhite members to join the organization. Over the preceding two years, more than 1,400 people had been offered membership, with 42 percent of those being women and 35 percent non-white. (Obviously, some fell into both categories.)

In 2016, during the height of the #OscarsSoWhite protests, then-Academy president Cheryl Boone Isaacs vowed that the organization would double the number of women and non-white members by 2020.