The Santa Barbara International Film Festival always rounds up a good number of Oscar nominees, but this year’s version, the festival’s 25th, may have a particularly healthy crop. Two dozen nominees, with 30 nominations between them, have either already shown up or will participating in the 10-day festival, which began last Thursday and runs through February 10.

So far, the festival has feted Best Actress nominees Sandra Bullock and Carey Mulligan; weathered scheduling snafus caused by California’s governor, Arnold Schwarzenegger; unveiled the little-seen animated Irish film “The Secret of Kells,” a surprise nominee for Best Animated Feature; celebrated the career of James Cameron; and then crowned Cameron’s Best Picture and Best Director competitor Kathryn Bigelow “king and queen of the world” while she was sitting next to Cameron (below). 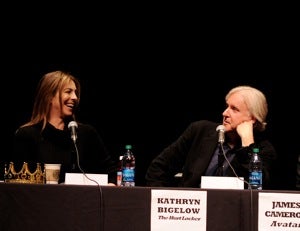 Although the festival began last Thursday with a screening of “Flying Lessons,” its first Oscar-related event came the next night, when Bullock was presented with the American Riviera Award. The ceremony was by all accounts a complete love-fest, enlivened by Bullock’s engaging, down-to-earth manner and refusal to take herself or her career too seriously.

“I’d be surprised if any Oscar voters in the room (there are apparently many) who came into the evening on the fence about Bullock’s awards-worthiness weren’t won over by her charm and humility, as well as by Whitaker’s high praise,” wrote Scott Feinberg of And the Winner Is …

(According to festival director Roger Durling, about 200 AMPAS members live in Santa Barbara. No word on how many of them attended.)

Saturday night’s presentation of the Modern Master award to James Cameron was reportedly a looser, messier affair, in which presenter Arnold Schwarzenegger’s 10-minute appearance threw things into disarray. Cameron apparently thought he was getting his award at the beginning of the evening because of the governor’s tight schedule, so when he was introduced to start the presentation he immediately began his acceptance speech. Moderator Leonard Maltin eventually corralled Cameron to do the Q&A – which then had to be halted in the middle when Schwarzenegger did show up to give out the award.

Sunday night’s Virtuoso Awards, meanwhile, paid tribute to three actors who missed out on Oscar nominations, and one who didn’t. Emily Blunt (“The Young Victoria”), Saoirse Ronan (“The Lovely Bones”) and Michael Stuhlbarg (“A Serious Man”) were what we assume were near-misses; Carey Mulligan (“An Education”) was the nominee.

(“Precious” star Gabourey Sidibe also received the Virtuoso Award, but due to scheduling conflicts hers will be presented later in the week at a different ceremony.) 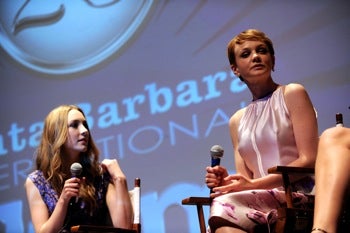 The four actors all rhapsodized about their jobs, and passed along the best pieces of acting advice they’d ever been given. For Blunt, it was Alan Arkin’s comment, “It doesn’t have to be perfect, it just has to be real.” For Mulligan (right, with Ronan), it was director Joe Wright’s reminder to her when she shot her first scene in her first movie, “Pride and Prejudice”: “You don’t need to do much, but you do need to do something with your face.”

At a party afterwards, Mulligan said she’s learning to relax and enjoy awards season. “At the Golden Globes I was a nervous wreck," she said, "but now I’m kind of enjoying it.”

In between the ceremonies (and the three dozen film every day), the festival assembled a couple of heavyweight weekend panels to talk about filmmaking. Saturday’s screenwriters panel, moderated by Anne Thompson, was a collegial affair, with Mark Boal (“The Hurt Locker”), Pete Docter (“Up”), Geoffrey Fletcher (“Precious”), Alex Kurtzman (“Star Trek”), Nancy Meyers (“It’s Complicated”), Scott Neustadter (”(500) Days of Summer”) and Jason Reitman (“Up in the Air”).

Reitman and Meyers agreed that it’s easier to write with an actor in mind – Meyers, in particular, said that if she doesn’t envision a lead actress when she’s writing, she thinks of herself. It’s much more productive, she said, for her to think of, say, Meryl Streep (as she did while writing “It’s Complicated”), because the Meryl character will be braver and more resourceful than the Nancy character.

The disadvantage, Reitman added, is that sometimes you can’t get that person: he said he wrote “Thank You for Smoking” with George Clooney in mind, but Clooney “had no interest.”

Boal said that he was told that “The Hurt Locker” could obtain financing only if Ralph Fiennes, who had worked with director Kathryn Bigelow on “Strange Days,” would agree to play a role. So he wrote the part of a British diplomat (complete with a juicy monologue he figured would appeal to Fiennes) specifically for the actor – only to go to lunch with Fiennes and find that while the actor loved the rest of the script, he thought that particular scene and character was “terrible,” and would never consider doing it.

Over lunch, said Boal, he learned that Fiennes would prefer not to wear a suit, and liked the idea of playing a mercenary – hence the scene, born out of his desperation to land Fiennes, in which the bomb unit runs across a team of British mercenaries in the desert, and ends up attacked by snipers.

“People say, ‘Why is there a sniper scene in the middle of a movie about bombs?’” he laughed. “I never told the truth about it before, but that’s why.”

Quentin Tarantino called in sick to the screenwriters panel, but he showed up the next morning for a directors panel moderated by Peter Bart. (Reitman, who’d won the Scripter Award the previous night in Los Angeles, was a no-show this time.)

Introduced as “the Super Bowl of film festival panels” by Durling, the conversation included Bigelow (who got the biggest round of applause during introductions, and was then given the mock crown by Bart), Cameron, Lee Daniels (“Precious”), Docter, Todd Phillips (“The Hangover”) and Tarantino (“Inglourious Basterds”).

Bigelow talked about working on low budget films (“the more modest you can keep the budget, the more you can keep creative control”), while Cameron addressed the art of sequels and Daniels pretended to bristle when Bart brought up the criticism “Precious” has received from some in the African-American community.

“Why you gonna start this?” he said, as the crowd roared. “I’m having a good day. I’m with all these pretty white people, and you’re gonna start some s—?” 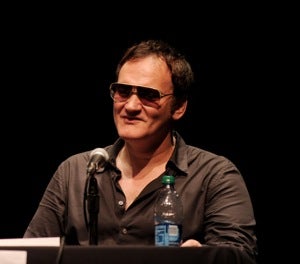 The always-garrulous Tarantino (left) was surprisingly subdued for much of the conversation, deferring to his colleagues. Near the end though – when he returned after abruptly leaving to use the bathroom – he began to dominate the conversation, particularly when he talked about his friendly rivalry with Paul Thomas Anderson, which segued into a story about the time Brian DePalma, who was close to finishing what he thought was his best movie, “Blow Out,” saw Scorsese’s “Raging Bull.”

“No matter how good you are,” said Tarantino, “there’s always f—ing Scorsese!”

When Tarantino said he and Anderson tended not to release movies at the same time, which meant they’ve rarely been in direct competition, Cameron glanced at Bigelow, who was sitting to his right.  Then he leaned to his microphone.

“Kathryn and I are going to coordinate better next time,” he said of himself and his ex-wife, the year’s two Oscar frontrunners.