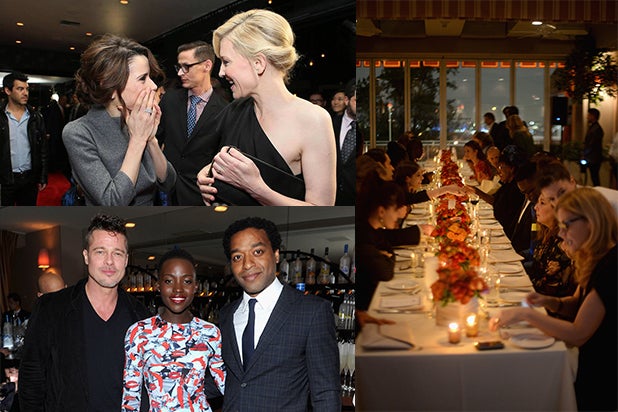 About three hours after picking up the Best Actress award at the Indie Spirits and a quick wardrobe change, Cate Blanchett was ready for round two.

While Julie Delpy and Richard “Rick” Linklater represented “Before Midnight”, Ethan Hawke was not due to arrive in L.A. until Sunday morning.

Blanchett had table No. 1 in the front left of the room. Barker and Bernard smartly pulled a move I’ve only previously seen at political fundraisers: keeping one chair empty at each table so they could float to each group during the dinner.

“‘Team Cate’ is amazing,” Barker told the room, referencing the booth that included agent Hylda Queally and Lisa Kasteler.  “Cate always signs her emails ‘the mother of Dash, Roman, and Iggy,’ which tells you something about her. For 2013, she is our sun, our moon, and our stars.”

The lit entrance to the STK Supper Suite for the party, where the menus and room were lit by glowing Fiji water bottles, a co-host of the night.

Before jetting off to Victoria Justice’s birthday party, singer Olivia Somerlyn played “Ordinary Love” which is nominated, but not for a Sony Pictures Classic movie. It’s from Weinstein Company’s “Mandela: Long Walk to Freedom.” She told TheWrap she’d listened to all the music from the SPC films, but couldn’t find a fit to perform at dinner. In a page from the hip-hop career growth formula, she’s managed by the Jonas Brothers’ dad.

Meanwhile, this group had reason to be smiling after dominating the Spirit Awards. “12 Years a Slave” had a Grey Goose hosted dinner at the Sunset Tower, now available because Vanity Fair is gone from the space this year.

The music drifting through after dinner came from a group of managers and agents who were kicking off a dance party next door in the Sunset Tower terrace.

Anna Faris with Stephen Merchant and Winona Ryder with Rick Linklater at the Sunset Tower party.

“I’m not as sad and pathetic as the characters I play. I’d like to clarify that,” Stephen Merchant (who had a great run as a sad and pathetic L.A. dater on HBO’s “Hello Ladies”) told several guests who were fired up to see him in a nightlife setting.

Merchant may not be the adjectives he mentions, but some of his bad luck rubbed off on Oscar nominee Rick Linklater. Linklater needed two trips to the Ipad wielding door women to get in after they temporarily put in a very porous and uneven “door hold” around 11 p.m.

The crowd, heavy on those with actual jobs – studio execs, producers, agents, and working talent –  was not entirely thrilled, but it seemed to be everyone arrived at “cool guy hour” – after hitting other parties.

…over at the Montage, Harvey Weinstein’s Nominees Dinner brought out some big guns.

Above: Meryl Streep, Taylor Swift, and Jamie King were among those invading Beverly Hills for the seated dinner and performance of songs from the new musical “Finding Neverland.”

Gary Barlow (left) performed, as did the women from “20 Feet from Stardom” and Jason Alexander. “Finding Neverland” begins this summer at the American Repertory Theater in Boston and then opens in London’s West End at the end of the year.

Harvey greets his guests at the party, a partnership with DeLeon tequila.

The night before, the British Consul quickly popped up a tent in the backyard of his Hancock Park home to save the GREAT British Film Reception from the torrential downpour.

Steve McQueen was the dean of the delegation, speaking on behalf of the 26 nominees. “Coming from Britain, as you all know, it has been difficult at times,” McQueen said. “It’s always about being hard-headed and being determined. Another round of applause for the nominees, please.”

The surprise guest arrived at the end of the party after many had left: Sir Alex Ferguson, a legendary football (soccer) figure in Britain with Manchester United for about 30 years. Philomena Lee got a break from being the most-approached when “Fergie” showed up.

Lee told me she’s looking forward to heading home to England. When she first came to promote the movie in the U.S., she was only supposed to come for five days, but ended up staying two and a half weeks. At one point during awards season, Harvey Weinstein gave her a ride home to England on a private jet as he was heading to the Berlin Film Festival. He dropped her off at Luton airport.

“It’s great how many have you have come out to the GREAT British Film Reception,” Consul General Chris O’Connor told his guests.” But we’ve also imported the great British weather,” he quipped.

The consulate smartly handed out heel caps for women to avoid a meet and greet with the wet and muddy grass in the backyard. Virgin Atlantic (who had cool flight attendants), Jaguar, and Land Rover climbed aboard to produce to the event.

Meanwhile on Friday, Dame Helen Mirren got out of the British reception early as she was co-hosting Women In Film’s annual nominees gathering. She took her responsibilities seriously.

Unlike Gwyneth Paltrow who got completely drowned out by people who would not shut up a few years ago, Mirren said “I’m not talking until everyone in this room gets quiet.” She got it.

She also dropped a few f-bombs while imparting to the younger actresses that “It’s great to be getting older,” and that she wishes she would be around in 40 years to see what happens next.

WIF does not discriminate based on gender.

Guys like “Wolf of Wall Street” producers Joey McFarland and Riza Aziz made the scene, but probably weren’t clamoring for the MAC Cosmetics gift bags like some who chose “wet in the rain” over “going home giftbag-less.”

By Sunday morning, the finishing touches on the Oscar after parties were being made.

This is a first look at the new home of Vanity Fair, at Sunset Plaza in West Hollywood.