Considering all of her talents and stature, Meryl Streep seems like a stranger to the VIP section of hot Hollywood nightclubs.

Yet on Friday night, hours before another trip to the Oscars, America’s acting deity and fresh liberal lion of Hollywood glided into Nightingale Plaza. 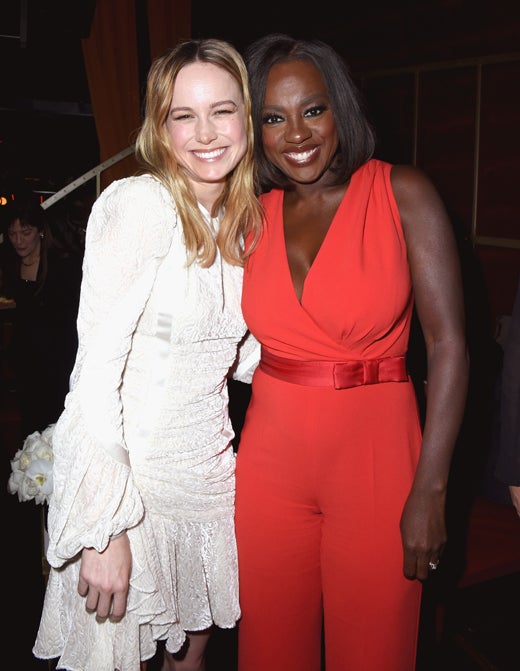 But unlike the bottle service and sparkler bombast that normally takes place under the array of LED panels, the most Oscar-nominated actor of all time huddled on the stage reserved for carnation-wearing women such as Ava DuVernay, Viola Davis, Emma Stone, reigning Best Actress Brie Larson.

They were among a large contingent of the 46 women nominated for Academy Awards this year who attended Women in Film’s 10th annual pre-Oscars cocktail party on Friday evening. 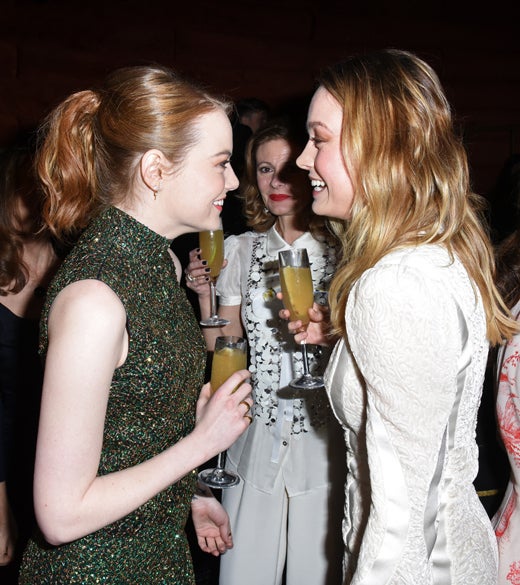 A passing of the torch? Best Actress nominee Emma Stone with Larson clink glasses of the Perrier-Jouët that was circulating throughout the space . (Getty Images)

“I dragged them up on this stage,” producer and Women in Film president Cathy Schulman said, admitting her role in getting DuVernay and Streep by her side on the stage. 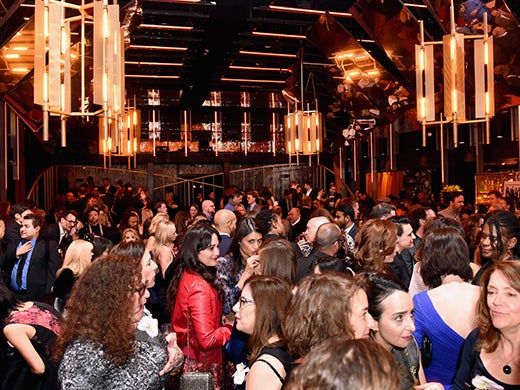 “I feel like never saying anything again,” Streep said, “because everyone is speaking up [about the current political environment] and that’s great.”

This huddle came hours after Jodie Foster, who had previously won the Golden Globes’ Cecil B. DeMille Award that gave Streep her political platform last month, made a rare public appearance a few miles away to speak out at UTA’s “United Voices” rally outside the agency’s headquarters in Beverly Hills. 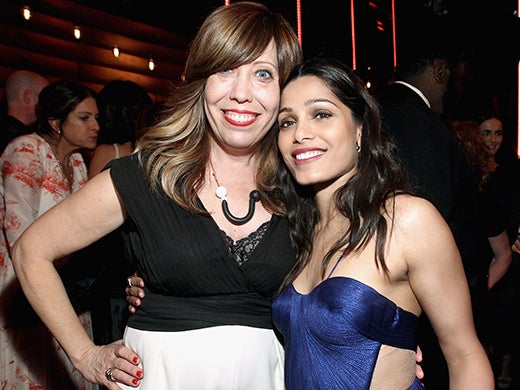 “Our ancestors have taught us how to fight, and we’re in a fight right now,” Ava DuVernay added, after Streep handed off the mic.

“We need to come together,” DuVernay continued. “[There is] power in numbers, power in unity. I hope we can take the energy that’s in the room like this that’s very celebratory and extend it throughout the whole year and continue to hold hands and stand by each other.” 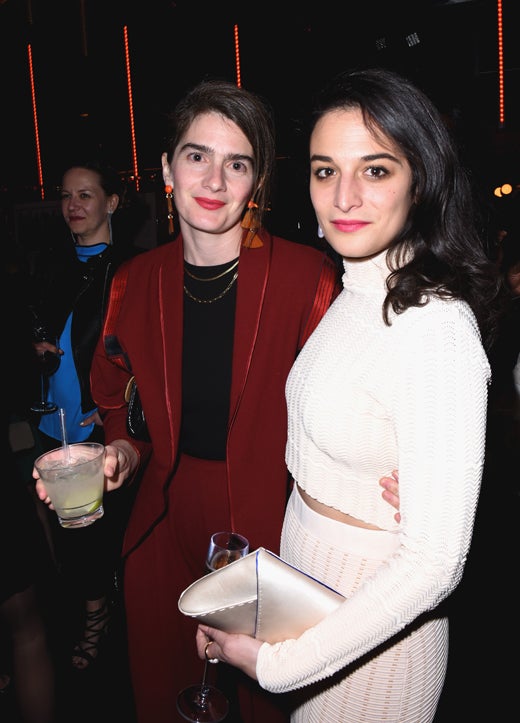 Also Read: How the Oscar Best Picture Winner Is Chosen, in 8 Not So Easy Steps 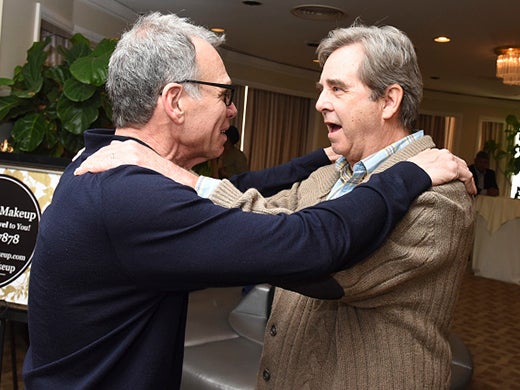 Stepping in to a booth to chat with the Party Report, Permut insisted that his “Hacksaw” sound wizard Kevin O’Connell should finally break his 0-for-20 nomination curse on Sunday night.

In addition to Permut, the number of men at WIF’s pre-Oscars party has skyrocketed since the event’s early days in Mandalay Entertainment chairman Peter Guber’s living room, where a life-size “Batman” figure and this party reporter accounted for two of the only “Y” chromosomes. 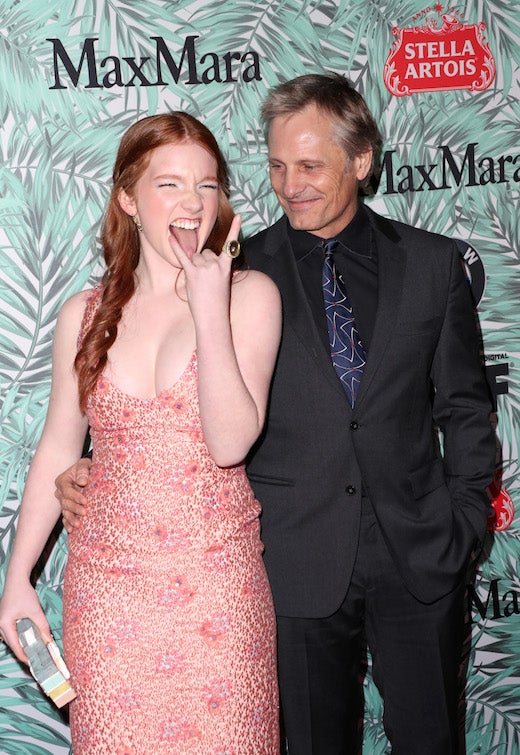 (Feig recently directed an Oscar promo in which host Jimmy Kimmel walks through an overly-simplified connect-the-dots career recipe for “How to Win an Oscar.” Hint: It begins by serving mozzarella sticks as a waiter.) Perrier-Jouët kept every glass in the room filled with bubbles during the two-hour event.

“I hope this can be a safe space to ask for someone’s phone number,” Brie Larson asked earnestly of the WIF crowd, known for its strong mentoring relationships. “We don’t have to be creepy. We can check in with each other.” 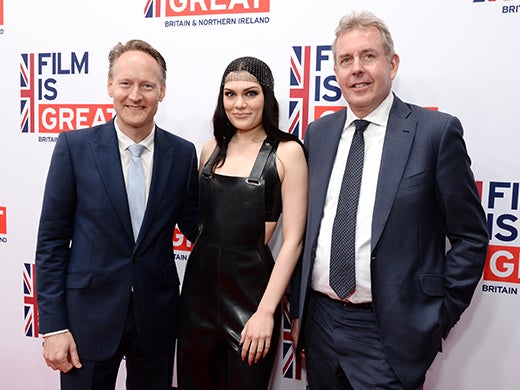 Directly across the street on the other side of La Cienega Boulevard, British Consul General Chris O’Connor was “checking in” with Britain’s nominees.

The annual celebration of the U.K.’s contribution to film and the creative industries, “Film Is Great,” took place at Fig & Olive.

“The film industry [generates] $1.3 billion dollars from foreign films made in the U.K., so it’s a big part of our economy,” Kim Darroch, the U.K.’s Ambassador to the U.S., told The Party Report. Oscar weekend marks the ambassador’s third trip to Los Angeles in a little over a year on the job in Washington. 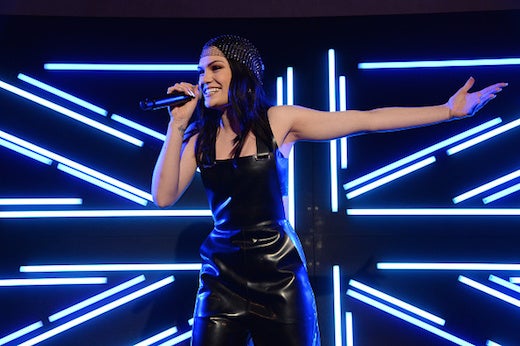 The “Bang Bang” singer has been camped in L.A. for the past few weeks, performing a Prince tribute at the Universal showcase over Grammys weekend. (Michael Kovac/Getty Images)

Jessie J would go on to perform in front of a neon Union Jack for a crowd that included Jacqueline Bissett (politely stating her name at the alphabetically cued check-in tables) and Aisha Tyler (wearing a t-shirt that said “Wild Feminist”). 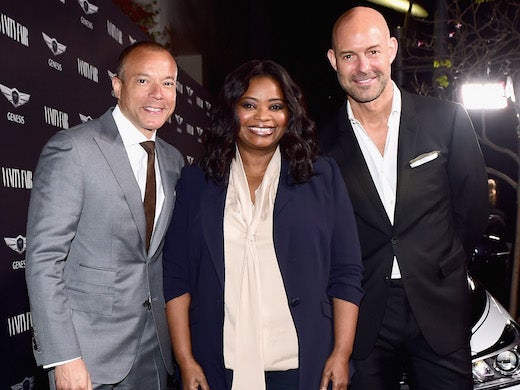 Elsewhere on Friday night, The Weinstein Company and Piaget held a cocktail kickoff party in the West Hollywood Hills (Kate Beckinsale navigated the snarling traffic to make it to the poolside soiree).

Over in Hollywood, across the street from the Dolby Theatre on the now-closed Hollywood Boulevard, Jeff Beacher reopened his Beacher’s Madhouse in the basement of the Roosevelt for a special Oscars weekend one-off.

Just down the block at Sycamore Tavern,  “Survivor” personalities Corinne Kaplan and Max Dawson celebrated the one year anniversary of their podcast “All the Fixins” with the show’s fan financial backers, some of whom flew in from across the country.