The Oscar parties have already begun, some perhaps a little smaller and some missing altogether after the pandemic-induced hiatus. But Hollywood’s biggest stars have dusted off their tuxes and found the newest fashions (pantsuits are hot for women this year) to begin the rounds of real-life Oscar week parties. Note that vaccinations are required for entrance to most events, with some asking for current negative tests as well.

All events listed here are by invitation only, except for the Academy Screening/Discussion series, which are open to the public.

From Wednesday to Saturday, the Academy presents its annual discussion series from a number of the disciplines, exploring documentaries, international feature films, animated features and makeup & hairstyling. Times range from morning to evening, with tickets available on the Academy’s website.

At this new party that’s likely to turn into an annual event, UTA and the Academy act as two of the major sponsors to celebrate South Asian film excellence. Priyanka Chopra Jonas, Mindy Kaling, Kumail Nanjiani and others of South Asian heritage host the gathering. Honorees include Riz Ahmed, Suroosh Alvi, Joseph Patel, Elizabeth and Gulistan Mirzaei and others as all celebrate the Academy’s drive toward diversity.

Essence magazine is back, hosting this annual luncheon that focuses on Black women in Hollywood. This year celebrates the “Black Cinematic Universe,” with a list of honorees that include Supporting Actress nominee Aunjanue Ellis (“King Richard”) as well as Nia Long, Quinta Brunson and Chante Adams. Damson Idris (“Snowfall”) is the afternoon soiree’s host.

Celebrating the Latino Oscar nominees with a luncheon filled with Hollywood types as well as community activists and thought leaders.

Vanity Fair magazine editor Radhika Jones joins Lancome in their ninth annual bash to keep glamour and beauty front and center on the Hollywood scene. Amanda Seyfried co-hosts this bash for the beautiful people, who are certain to slip some Lancome swag inside their Birkin bags on their way out the door.

The U.S.-Ireland Alliance’s annual Oscar Wilde Awards returns to their old stomping ground of the Ebell, moving from Bad Robot to allow for more space in a COVID-affected world. Always held in support of the ongoing relationship between the USA and Ireland, this fun party always brings out a huge crowd, starting with J. J. Abrams, who returns as host and emcee. This year’s honorees are Kenneth Branagh, Jamie Dornan, Adam McKay and Donall O Healai, with presenters including Mary Steenburgen, Reinaldo Marcus Green and Richard Curtis. Loah & Bantum and True Tides provide the musical charm.

MACRO producer Charles D. King is back to host his company’s annual party that honors the Black talents nominated for the 2022 Academy Awards. His wife Stacey Walker King co-hosts the party, this year presented by Chase Sapphire at SoFi Stadium, with music by DJ D-Nice.

GBK teams up with eBay this awards season in a return to the good old days of hosting their luxury lounges that A-list Oscar winners seem to just love. So expect to see people like Viola Davis, Susan Sarandon and many more familiar faces as GBK CEO Gavin Keilly brings his Brand Bar concept to this year’s celebration. eBay will gift high-end handbags and watches, while gorgeous resorts like Sail Rock in Turks and Caicos offer up private villa stays. The charitable arm of GBK plans donations to Ukrainian war relief via the American Red Cross as well.

The DPA Gift Suite returns with activations that include a Kenya safari lounge sponsored by the Kenyatta International Convention Centre and complete with gifting of Kenya safaris to a select few as well as a private spa presented by Swiss Nescens. Past visitors like Spike Lee and Diane Warren are likely to turn up for some gifting and pampering, especially with the DPA offering of many other high-end beauty products, handbags and more. 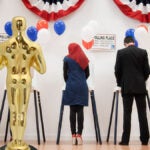 Also Read:
What the Oscars Academy Can Teach the U.S. About How to Run Political Elections (Guest Blog)

Celebrating the Oscars for the 16th year is Debbie Durkin, with her EcoLuxe Lounge that starts with the Hilton Hotel’s Champagne brunch, then continues with swag collecting of things like stays at A Place in the Sun Hotel in Palm Springs, high-end skincare products and even a puppy adoption via Wagmor Pets. Nominees may want to consult Louise Jones, a Belfast-based psychic, as to their chances on Sunday evening, too!

The Women in Film 15th annual party dances into the new hotspot, Bar Lis at the Thompson Hollywood Hotel, to fete the 60 female Oscar nominees of 2022. WIF Board president emerita and Oscar-winner Cathy Shulman hosts along with her Oscar-winning co-host H.E.R. and if past parties prove the norm, there will be a Bar Lis full of nominees and their favorite galpals.

The British Academy Award nominees are all invited to this annual pre-Oscar bash held at the British consul’s home. We’re not sure if Kenneth Branagh and Jamie Dornan have embraced their “British” heritage, but lots of British Hollywood ex-pats and otherwise love to attend this lovely afternoon tea.

Suzy Amis Cameron joins with TENCEL and CLO Fashion to bring the annual Red Carpet Green Dress initiative back to the Oscars again promoting sustainable advances in fashion. The “Green Dress” will once again grace the Oscars red carpet on a new ambassador, while past Oscar ambassadors including Missi Pyle, Danielle Macdonald and Laura Harrier just might turn up at this very private party. We’re pretty sure James Cameron will, too.

CAA has a gaggle of big stars on the Academy Awards nomination list, so they’re having this celebration at the most exclusive spot in Hollywood. Look for clients like Will Smith, Nicole Kidman, Beyoncé, Andrew Garfield, Penelope Cruz and our favorite underdog (Jesse Buckley) in the mix.

Global Green joins with Energy Independence Now in a very timely event that reminds Hollywood that zero emissions and ecological protection need to be the talk of the town. Eric Krasno and Jake Wesley Rogers perform at this bash that often draws eco-warrior movie stars like Leonardo DiCaprio into the fold.

The 20th Annual Night Before Party will once more be filled with the world’s most famous faces, as this casual party always benefits the Motion Picture & Television Fund, which helps members of the entertainment community in need or with later-in-life aging needs. This easygoing A-list celebration brings out the top names in Tinseltown every year; this year Jon Shook and Vinnie Dotolo are serving up the eats.

Expected hosts include Lady Gaga, Billy Porter, Eric McCormack and David Furnish; Elton will beam in from Omaha where he is on tour. Musical performance by Brandi Carlile with lots of familiar faces in the crowd.

Expected guests include Jon Hamm and Derek Hough who will be checking out the new Mercedes-Benz Concept EQG a near-production preview of an all-electric model variant of the G-Class, one of Hollywood’s favorite vehicles.

Expected guests include all Oscar winners, lining up at the engraving station to get their trophies permanently branded, while sipping on Francis Ford Coppola Chardonnay and Cab Sauvignon limited editions in gold-wrapped bottles. Wolfgang Puck returns to cater once again in an all-new collaboration with Ghetto Gastro.

Expected guests include Vanity Fair EIC Radhika Jones and every single one of her A-list Hollywood pals. And maybe the fire marshal.

Nominee Beyoncé will be having extra fun this year if she wins, along with expected guests like Gold Party regulars Ava DuVernay, John Legend and Chrissy Teigen. But we suspect that Rhianna’s advanced pregnancy may keep her from burning the midnight oil this year.

Oseary, Madonna and all their best friends are back with this very late-night house party for those who never want to actually sleep until Monday afternoon.