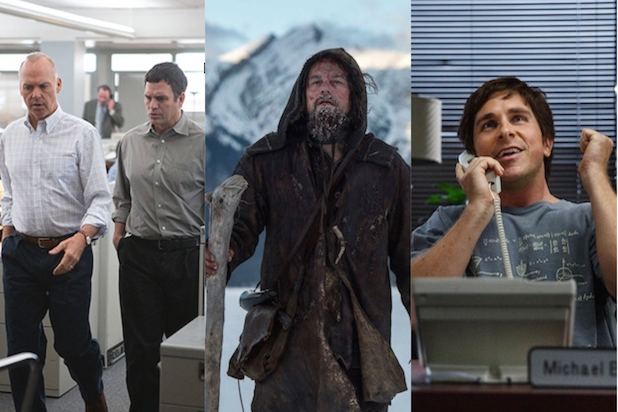 The most important number in this year’s Oscar race is No. 2.

And the most important movies in the Best Picture race are “Bridge of Spies,” “Brooklyn,” “Mad Max: Fury Road,” “The Martian” and “Room.”

That might not make sense, considering that the current favorites in a tightly contested Best Picture category are “The Big Short,” “The Revenant” and “Spotlight.” But as Academy voters prepare to cast ballots beginning on Friday in the most competitive race in at least a decade, there are good reasons to entertain ideas that don’t initially make sense.

And there are real reasons to think that the most important battleground in the entire race will be for the No. 2 votes of Academy members whose first choices aren’t one of the three favorites.

“The Big Short” is a strong contender because it won the Producers Guild Award, the most reliable predictor of Best Picture success in recent years. “The Revenant” is a major player because Alejandro G. Inarritu won the Directors Guild Award, which has historically been the most reliable predictor. And “Spotlight” is a favorite because it won the Screen Actors Guild ensemble award, a sign of strength among the voters who make up by far the Academy’s largest branch, actors.

All three movies have lots of diehard fans who will put them at No. 1 on their Best Picture ballots, the one category that asks voters to rank the Oscar nominees in order of preference. And given the rare split between the three major guilds so far, it’s logical to think that the three will be in a tight race from the start.

“Whatever happens, the only thing we know for sure is that it’s going to be really close,” one perplexed voter told me this week.

But there’s little reason to think that any of the frontrunners will be ranked first on more than half of the 6,261 eligible voters’ ballots, which is what it takes to win outright under the category’s preferential count. It’s more likely that they’ll be tightly grouped as a top three.

But the way the preferential count works, if one film doesn’t have 50 percent of the No. 1 votes plus one (2,818 if 90 percent of the eligible voters cast ballots), the accountants turn to the ballots of the film with the fewest votes, eliminate that movie from contention, and shift each of its votes to the film ranked second on that ballot.

That process continues, with the least popular film eliminated to begin each new round, until one film passes the 50 percent threshold. If a voter’s No. 2 choice has already been eliminated, the vote is shifted to No. 3, or the highest-ranked film that’s still in the running.

If you’re not going to get enough No. 1 votes to win outright — and it’s almost inconceivable that any film could do that this year — then the real battleground will be for those No. 2 slots. It doesn’t hurt “The Revenant” or “The Big Short” or “Spotlight” if a voter makes “Brooklyn” or “Bridge of Spies” his or her first choice — but when “Brooklyn” or “Bridge” is eliminated, a savvy campaigner has to make sure that the vote slides to their movie, not to a competitor.

So that’s where this year’s Best Picture race will probably be won and lost: on the ballots of “Room,” “Brooklyn,” “Bridge of Spies,” “The Martian” and “Mad Max” as those films fall by the wayside.

(I know that the folks who are working a few of those movies, particularly the last two, think that they still have a chance to be the last film standing — but all of them are liable to enter Oscar night without having won a single major guild award. And in the 20 years that the DGA, PGA and WGA have been giving awards and SAG has been handing out the ensemble prize, nothing has ever won Best Picture without at least one of those guild honors.)

Can we look at the films likely to be eliminated, and deduce where their votes are most apt to go? This is an oversimplification that doesn’t give Academy voters enough credit for diverse tastes, but let’s say that maybe “The Revenant” appeals to the same lovers of big, muscular filmmaking who might have put “Mad Max” and “The Martian” at the top of their ballots, while “Spotlight” and “The Big Short” will be more to the liking of voters who’d put the talkier, quieter “Room” and “Brooklyn” on top.

“Bridge of Spies” lovers could go either way, though for the sake of argument let’s say they’re slightly more aligned to the “Spotlight”/”Big Short” side of the ledger.

If that’s true, then “The Revenant” will benefit from the ballots of two of the first five films to be eliminated, while “Spotlight” and “Big Short” will split the ballots of the other three. If the latter two films evenly divide those pickings, that could give a slight edge to “The Revenant.”

But if the race is really close between those top three films, here’s one more thing to consider: The first five films could easily be eliminated and their ballots redistributed without any of the remaining contenders hitting the 50 percent mark. At that point, whichever one of the top three is in third place will itself be eliminated — and if it’s “Spotlight” or “The Big Short,” you could expect it to provide a windfall of votes that’ll help the non-eliminated film in that pair to beat “The Revenant.”

So if “The Revenant” wants to come out on top, it needs to secure lots of votes in the first five rounds of redistribution, to fend off what could well be a last-minute surge by either “Big Short” or “Spotlight.”

What’s next? Will “Spotlight” and “The Revenant” jockey for endorsements from Saoirse Ronan or Jacob Tremblay?

Will Matt Damon‘s good-natured jibe at Leonardo DiCaprio at the DGA Awards — “Leo, we weren’t cold at all — just saying, there is another way” — be quietly flagged as a sign of respect from “The Martian” to “The Revenant,” or held up as a diss?

Will Christian Bale and Steve Carell conspicuously pal around with George Miller at BAFTA on Sunday?

Voting begins in two days and ends in less than two weeks. The battle for No. 2 begins.