So Adam Shankman and Bill Mechanic got Sacha Baron Cohen on the Oscars after all.

The Oscar show co-producers recently told NPR host Terry Gross that British comic Baron Cohen, known for his characters Borat and Bruno, was their first choice to host the 82nd Academy Awards, but that the Academy had vetoed the suggestion. But they have booked Baron Cohen to be a presenter on the March 7 show, announcing the booking in a press release that also includes Jason Bateman, Steve Carell, Tina Fey and Ben Stiller. 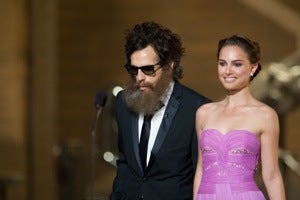 Bateman and Baron Cohen have never before appeared on the Oscars. Fey made a well-received Oscar debut last year, co-presenting with Steve Martin. Carell and Stiller are Oscar vets, with three and five appearances, respectively.

The booking of Stiller probably means a little more work for the Oscars writing team. In his previous appearances on the show, the actor always painstakingly worked out his material, often doing substantial rewrites all through the rehearsal process.

He has also appeared on the Oscar show with a long beard (right), in a green-screen special effects leotard, as a dwarf from "The Lord of the Rings," and in his costume from “Starsky and Hutch.”