This year’s Oscar show scares me, and not just because it’s going to include a montage of horror-movie moments.

No, the show scares me for other reasons. It scares me because of things I’ve heard, things the producers have said, moves they’ve made, and fears that are hard to shake about a show that may be so desperate to attract a young audience that it could lose the essence of what the Oscars are.

Here’s something, for instance, that scares me: co-producer Adam Shankman has been saying that the opening number is going to be the greatest Oscar opening ever.

Somebody who’s worked on many Oscar shows over the years mentioned Shankman’s boast to me, and then said, “You know who the last person was who said that, don’t you?” 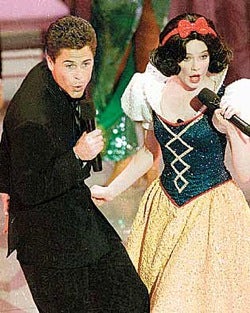 His opening number was 12 minutes long. You might remember that it included Rob Lowe doing a duet with Snow White on a rewritten version of “Proud Mary.” Carr hadn’t gotten permission from Disney, which sued the Academy over unauthorized use of its character.

And that was just one part of a number that also included Merv Griffin singing “I’ve Got a Lovely Bunch of Cocoanuts.” It was unbelievably bad, and the rest of the show wasn’t much better. (Some of it, in fact, was even worse.)

I’m not saying that Shankman’s opening number will be like that. But boasting about Oscar openings, particularly when those openings involve lots of dancers, is a dangerous game.

So is eliminating the performances of the nominated songs – making this show the first one on which they won’t be performed since, um, the Allan Carr Oscars.

(After I made that connection on Twitter a couple of weeks ago, an Oscar staffer sidled up to me at a subsequent AMPAS event and muttered, “What you wrote about Allan Carr was brilliant. We don’t like to talk about it, but everybody’s thinking it.”)

Maybe the Legion of Extraordinary Dancers will live up to their name. Maybe it won’t seem ridiculous to have their acrobatic moves set to music from nominated scores like “The Hurt Locker,” if that’s the plan.

But I’ve seen lots of those numbers over the years, and even the best of them – Stomp, for instance – play better in person than they do on TV. And none of them, really, have anything to do with the movies, no matter how torturously the show’s writers try to make connections.

The booking worries me, too, with Miley and Taylor and Kristen and their ilk on hand to get that “young audience.” Although with six dozen presenters, some of the weightiest of whom won’t be announced ahead of time, maybe the kids will be lost in the shuffle.

But if you were an Oscar winner, would you really want to receive your statuette from Miley Cyrus?

(I’m pretty sure I know who’ll be on the receiving end of Ms. Cyrus’ largesse, and I’d guess that the answer would be no … except that an Oscar is an Oscar, and it probably doesn’t matter who hands it to you.) 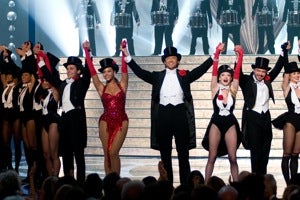 Understand, I could be completely wrong here. Before last year’s Oscar ceremony, I was worried as well. And that turned out to be a strong show, especially if you ignored that big Hugh Jackman/Beyonce/Broadway-goes-“Mamma Mia” number. (Photo by Michael Yada/AMPAS)

So I might be off-base. I might be speaking from ignorance. I’ve been inside the theater and seen the set, which looks good, and some of the awards presentations, which may work. I know a few things about the show that I’ve written about, and others that I haven’t.

But there are plenty of things I have no idea about, plenty of ways in which the show can surprise me, plenty of areas where I’m in the dark.

Besides which, Steve Martin is probably my favorite Oscar host, with a knack for finding exactly the right tone; he and Alec Baldwin will, I expect, be a top-notch team.

And, to be fair, I’ve talked to people who’ve seen parts of the show and were blown away.

I hope they’re right. I don’t want it to be a bad show. I want the emotion Shankman and Mechanic are trying so hard to get to be there, and I’d really like it if the “So You Think You Can Dance” dancers look as if they belong at the Oscars instead of being interlopers from reality TV.

But when the glitz factor increases, and when they start talking about five dozen hoofers instead of “The Weary Kind,” and when I hear boasts about the greatest Oscar opening ever, I can’t help it.