“Anvil! The Story of Anvil” may have been left of the Oscar documentary shortlist, but the film became one of awards season’s first triumphs on Monday when the International Documentary Association announced a few of its awards in advance of Friday’s IDA Documentary Awards ceremony.

The film, director Sasha Gervasi’s fond look at the long-struggling Canadian hard rock band, won the IDA’s music documentary award. It’s also nominated for the top feature-documentary prize, where it will go up against “Afghan Star,” “Diary of a Times Square Thief,” “Food, Inc.” and “Mugabe and the White African.” 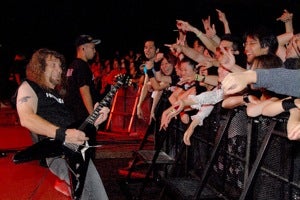 The last two of those films are on the shortlist of 15 films that are still in the running for the Academy’s feature-documentary award. “Afghan Star” has been submitted by the UK in the foreign-language film category.

Other film winners announced on Monday include “Garbage Dreams,” which won the IDA/Humanitas Award (for a film “that strives to unify the human family”) and is also on the Oscar shortlist, and the short “The Final Inch,” one of last year’s Oscar nominees in the documentary-short category.

The rest of the IDA Awards will be announced at a ceremony to take place on Friday, December 4th at the Directors Guild.