Tuesday night brings one of the strangest of the rituals used to determine Academy Award nominations.

It’s the presentation of all the eligible contenders in the Oscar original-song category, a three-hour endurance test in which members of the Academy’s music branch will be asked to watch randomly-assembled three-minute clips of the scenes in which all 63 of the eligible songs appear.

They’ll see a U2 ballad from “Brothers,” and a Linkin Park rocker from “Transformers.”  They’ll watch five songs from “Hannah Montana the Movie” (below) and four from “The Princess and the Frog.”  They'll be exposed to a couple of rap songs, a handful of tunes not in English, and a sexually-explicit parody of charity anthems performed by an all-star cast that includes Bono, Sting, Slash, Snoop Dogg and Elton John. 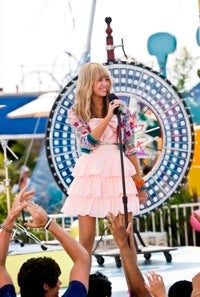 At the end of each song, they’ll be asked to score it on a scale of six to 10. Other voters will do the same after watching the same clips at home on DVD.

And when the scores are tallied, the top five – or fewer, since nothing’s eligible unless it gets an average score of at least 8.25 – will become Oscar nominees.

The Academy occasionally gets it right in this category, in the process honoring fully deserving songs like “Streets of Philadelphia” and “Lose Yourself” and “Falling Slowly."

But it’s a terrible system, and it doesn’t do what the Academy wants it to do.

The whole idea behind requiring voters to watch film clips instead of just listening to the songs was to make sure they considered how the songs work within the film.

That’s not the same thing. Not even close.

In the four years since the process was instituted, 16 songs have received nominations. Nine of them, almost 60 percent, were performed onscreen, which is obviously the format that stands out the most in a string of clips. (By contrast, fewer than 20 percent of the nominees were performed onscreen in the 10 years before the process was initiated.)

Three other nominees provided prominent musical accompaniment for montages (or, in the case of “Slumdog Millionaire,” a chase scene). Three were used in the end credits, but with significant visual accompaniment: an entire end-credits dance sequence in “Slumdog,” an animated illustration of the lyrics in “Wall-E.” Only one, Dolly Parton’s jaunty “Travelin’ Thru” from “Transamerica,” appeared in the credits unaccompanied. 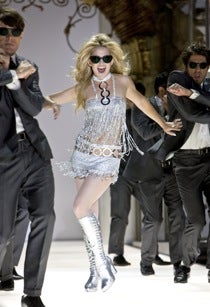 Songs that are performed onscreen are not automatically better than songs that are used unobtrusively. Songs that appear in the end credits with cute little sequences built around them are not necessarily more integral to their films than end-credits songs that play behind lists of names.

But this system suggests that both of those things are true, and in the process it does a real disservice to the art of writing music for films.

One example: anybody who saw Darren Aronovsky’s “The Wrestler” knows that Bruce Springsteen’s title song was enormously important punctuation to the end of the movie. The song begins playing a couple of seconds after Mickey Rourke takes a flying leap that will likely kill him; Rourke jumps, the screen goes black, there’s a pause … and then Springsteen’s mournful lament starts. Not only does it cue the audience as to what has happened, it sums up the film emotionally in a way that was as affecting, and as effective, as any song from any movie that year.

If the song had been used in a montage half an hour earlier, it would have hurt the film – but it sure would have boosted Springsteen’s Oscar chances, which were essentially killed by the fact that voters who hadn’t seen the film saw nothing but the song playing over a roll of credits. He wasn’t even nominated.

I sat down with film composer Hans Zimmer on Monday, and at the end of the interview our conversation turned to the Oscar song process. Zimmer, who has seven nominations and one win (for “The Lion King”), summed up exactly what I had already begun to write, but from the point of view of somebody who knows the game and has voted in it.

“The only way you can judge if something works is that you have to have seen the whole movie,” he says. “And if we don’t have time to see the whole movie, we shouldn’t be voting.

“I mean, I’m in the business of what music does once you attach a story and visuals to it. And I know that I can write a really pretty tune that will be great for three minutes, but it won’t mean anything if I don’t pay it off over the length of the movie. Just seeing a quick little excerpt won’t tell you anything about the journey that music takes you on.”

Zimmer says he’s still baffled by the Springsteen snub, but he understands why the process can penalize songs that play over the credits. “Even an end title song can have a resonance if you have seen the whole film,” he says. “And it won’t have that resonance without seeing all the other stuff that comes before.”

The problem, of course, is that most branch members might not have the time to see all 47 films from which the 63 eligible songs have been drawn. One solution might be first-round committees to see the films and narrow down the list of contenders – but those committees have caused their own controversy in categories like foreign-language film and documentary. 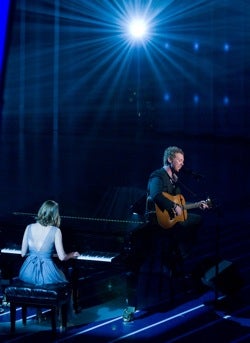 I admit that the category has given me some of my favorite Oscar moments over the years, from being trapped in a Dorothy Chandler Pavilion stairwell with an Oscar-toting Springsteen back in 1994 to watching Glen Hansard and Marketa Irglova (left; AMPAS photo by Darren Decker) win for "Falling Slowly" 14 years later.

But the system isn't working, and more tinkering is required. Besides, the music branch has long faced controversy, and long responded by tinkering. In 1976, they threw out an entire slate of nominees and changed from a committee to a vote of the entire branch mid-season. In the 1990s, after a dispiriting string of wins for Disney’s animated movies (four in six years), they split the original-score category into two, separating dramatic scores and musical or comedy scores. That experiment lasted for four years before they went back to a single category.

And now the original-song experiment has lasted for five, albeit with some adjustments along the way. In a couple of weeks, we’ll know how well it worked this year; we’ll know if being heard over the end credits hurt U2’s “Winter,” and if getting a dazzling dance number helped the otherwise lackluster “Nine” song “Cinema Italiano.”

But whatever the slate of nominees looks like, the process is broken. And the music branch needs to figure out how to fix it.