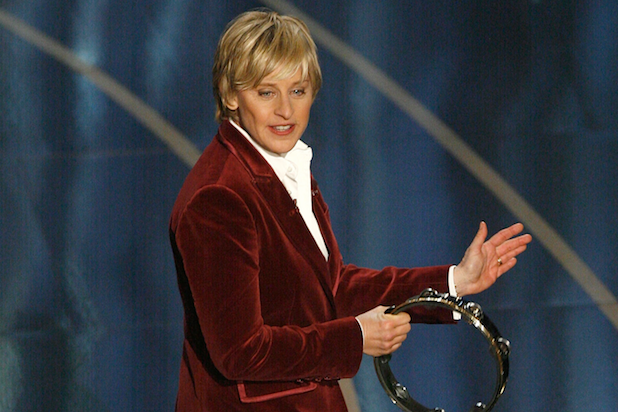 Moviegoers and Oscar watchers are gunning for Leonardo DiCaprio to take home his first Academy Award, according to a poll by Fandango.

“The Wolf of Wall Street” nominee was the choice of 41 percent of the over 1,000 people surveyed as the Oscar nominee without a previous victory they were most hoping to see win.

Also read: Behind The Scenes, On the Carpet at TheWrap’s 5th Anniversary and Nominees Party 2014 (Photos)

In head-to-head match-ups, 59 percent of voters would prefer to see DiCaprio prevail over McConaughey, while 53 percent would be happy to see Sandra Bullock (“Gravity”) win over Cate Blanchett (“Blue Jasmine”) in the Best Actress race.

As for hosts, moviegoers were excited to see Ellen DeGeneres return as emcee. The daytime host previously served as ringmaster for the 2007 edition.

“Ellen has become one of the most beloved television personalities working today,” Dave Karger, Fandango’s chief correspondent, said. “Everyone in the industry and around the country loves her quick humor and she’s the perfect cheerleader for Hollywood on its biggest night.”

71 percent of those surveyed were more excited to watch DeGeneres as host rather than James Franco and Anne Hathaway, the latter of which oversaw a critically-panned 2011 show. 65 percent were more enthused about DeGeneres than last year’s host, Seth MacFarlane. Ellen also beat out 2009’s popular host, Hugh Jackman, pulling a 69 percent win over Wolverine.

DeGeneres even prevailed over Billy Crystal, with 55 percent of respondents favoring her over the nine-time veteran.

71 percent of respondents said they plan to see the winning films after they are awarded Oscars. It pays to be crowned best on Oscar night.