We all knew this was coming, didn’t we?
The Academy announced four new presenters for the Oscar show on Monday, four stars whose fame is so substantial that AMPAS didn’t even include their last names in the headline of the press release:
Miley, Taylor, Zac and Kristen.
As in Cyrus, Lautner, Efron and Stewart. 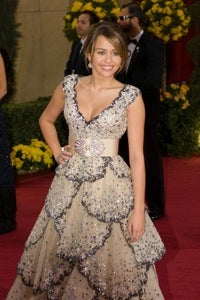 None of whom, to be frank, are liable to be contending for Oscars any time soon … but all of whom mean something to the young viewers the Academy would dearly love to attract.
As far as I can determine, the Academy has never before issued a press release without last names, unless you count Madonna and Cher.
Of the credits listed in the press release — which include gems like "High School Musical 3: Senior Year," "Hannah Montana: The Movie," "The Adventures of Sharkboy and Lavagirl in 3-D" and "Zathura: A Space Adventure," two ("Bolt" and "Into the Wild") have been nominated for Oscars.
Efron and Cyrus (right, photo by Bryan Crowe/AMPAS) have appeared on the Oscar show before.
Stewart got some awards-show experience on Sunday at the Orange British Academy Film Awards, where she won the Rising Star Award over such respected actors as Carey Mulligan ("An Education") and Tahar Rahim ("A Prophet").  The award was the only honor of the night not voted on by the public, not BAFTA members.
Her acceptance speech is below.
But first, the press release in all its glory:
MILEY, ZAC, TAYLOR AND KRISTEN JOIN 82ND OSCAR® SHOW
Beverly Hills, CA — Miley Cyrus, Zac Efron, Taylor Lautner and Kristen Stewart will present at the 82nd Academy Awards®, telecast producers Adam Shankman and Bill Mechanic announced today. This will be Cyrus and Efron’s second appearance, and Lautner and Stewart’s debut on an Academy Awards telecast.
Cyrus, who is best known for her “Hannah Montana” series and concerts, lent her voice to 2008’s Oscar-nominated animated feature “Bolt” and starred in 2009’s “Hannah Montana The Movie.” Cyrus will be seen next in “The Last Song” with Greg Kinnear.
Efron is currently working on “Charlie St. Cloud,” scheduled to be released later this year. His other film credits include “Hairspray,” “High School Musical 3: Senior Year,” “17 Again” and “Me and Orson Welles.”
Lautner can currently be seen in “Valentine’s Day” and recently completed work on “The Twilight Saga: Eclipse.” He is has several projects in development, including “Northern Lights” and “The Twilight Saga: Breaking Dawn.” Lautner’s other film credits include “The Adventures of Sharkboy and Lavagirl in 3-D,” “Cheaper by the Dozen 2,” “Twilight” and “The Twilight Saga: New Moon.”
Stewart, who portrays Bella Swan in the “Twilight” film series, will be seen next in “The Runaways” and recently completed work on “The Twilight Saga: Eclipse.” Her other film credits include “Panic Room,” “Zathura: A Space Adventure,” “Into the Wild” and “Adventureland.”
Academy Awards for outstanding film achievements of 2009 will be presented on Sunday, March 7, 2010, at the Kodak Theatre at Hollywood & Highland Center®, and televised live by the ABC Television Network beginning at 5 p.m. PT/ 8 p.m. ET. The Oscar presentation also will be televised live in more than 200 countries worldwide.
x
Looks like you're enjoying reading