On Friday, the Academy of Motion Picture Arts and Sciences announced that 10 live-action short films will advance to the next step in the voting process in their hunt for an Oscar. Seventy-one pictures had originally qualified in the category, which is fewer than normally do so.

Unlike the animated-short category, in which a few names often figure prominently, live-action shorts are not the province of a consistent creative force like Pixar or Nick Park. Most of the nominees in recent years have come from outside the United States, as do most of this year’s shortlisted films. 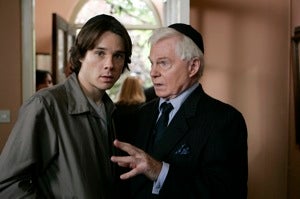 "The Door," for instance, is an Irish production, though it’s in Russian.  "The Ground Beneath" and "Miracle Fish" are Australian.  "Hotel" is British, "Instead of Abracadabra" Swedish.

Most are made by unknowns with unknown casts, although Vincent D’Onofrio stars in "The New Tenants," Derek Jacobi (right, with Rupert Evans) plays the title role in "Sidney Turtlebaum,"  and Kate Mulgrew and Peter Riegert appear in "The Response," which is based on the Guantanamo Bay military tribunals.

One of the film’s, USC student Gregg Helvey’s "Kavi," already won a Student Academy Award earlier in the year.

Here’s the list of films that made the cut:

Oscar nominations will be announced Feb. 2.