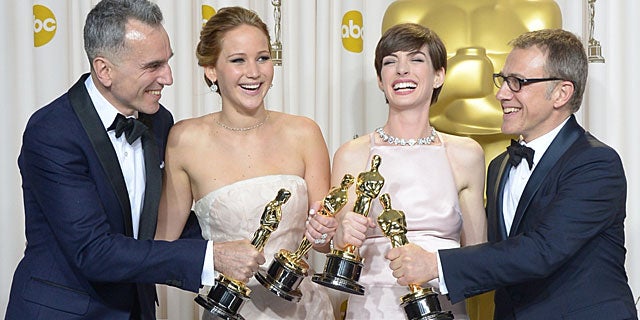 Oscar winners spilled their thoughts backstage after picking up their Academy Awards at the Dolby Theatre on Sunday, shedding light on how they felt to win the golden statue.

Here are some of the best:

Asked whether he wants to play any other historical figures, he said: "I can't think of anyone right now because I need to have to lie down for a couple of years. … It's really hard to imagine doing anything after this."

Jennifer Lawrence, Best Actress for "Silver Linings Playbook": Asked what flashed through her mind when she stumbled onto the stage, she said, "A bad word that I can't say that starts with F."

"I'm sorry, I did a shot before I [came backstage]," she said after a rambling response. Asked about host Seth MacFarlane's performance, she said: "I do love the boob song. I thought he was great. He was hilarious."

Ang Lee, Best Director for "Life of Pi": Asked about if he would celebrate his Oscar win and Chinese New Year, he said: "Yeah. The official closing of the Chinese New Year… we celebrate for 15 days, longer than anybody, I think. It's a nightly event and this is a great night for me and for everybody who liked the movie, particularly in Asia they help make this movie.  I wish them a happy new Year of the Snake.  Everybody gets lucky."

"I think it's a miracle that I could make this movie and then I carried the anxiety for a very long time, for four years. It's a philosophical book and an expensive movie, the worst combination, the most scary one, and just see how it's played out in the world," he added. "So coming in tonight I just thought everything is good.  So good.  And this is better than good."

Christoph Waltz, Best Supporting Actor for "Django Unchained": Asked if he'd make a third movie with director Quentin Tarantino, "This is about seven minutes old, somehow I failed to catch the moment to tell Quentin that I'm around."

Anne Hathaway, Best Supporting Actress for "Les Miserables": "Tom Hooper, our director, has gone on record as saying this film wouldn't have happened if Hugh Jackman didn't exist.  And I know exactly why he says that.  Hugh is this magical alien combination of strength and soul and heart and artistry and fun."

Bill Westenhofer, Best Visual Effects for "Life of Pi": Of the troubled visual-effects firm Rhythm & Hues, he said: "We're not technicians … we're artists, and if we don't do something to change the business model, we start to lose the artistry.

"Just like any facet of filmmaking that's matured, visual effects, it's got to the point where it's really about the artistry going forward," he said, then added of the struggling company: "We are hopeful that we can pull through the bankruptcy, but it is a concern in all of our minds that the culture is preserved."

Adele, Best Original Song for "Skyfall": What's next for the British songstress? "Maybe I'll do like an HBO special like Beyoncé did. And then a Tony, I'm not so sure. That may be one day maybe someone might want me to do a musical."