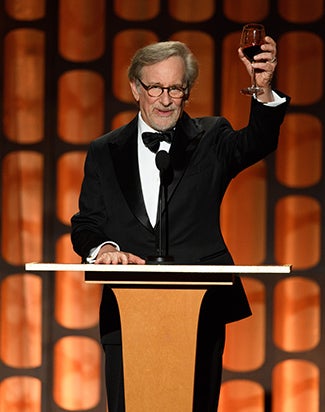 Richard Harbaugh/AMPAS
After their peek-a-boo moment on the carpet (above), Best Actress Oscar winners Emma Stone and Jennifer Lawrence brought Greta Gerwig in to the mix at the Governors Awards, inside the Ray Dolby Ballroom. That's the same place where the Governors Ball will take place immediately after the March 4 Academy Awards ceremony. 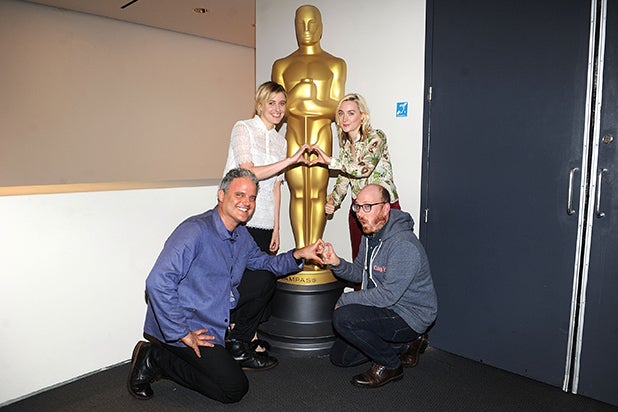 Brad Barket/Getty Images for The Academy of Motion Picture Arts & Sciences
Gerwig and her "Lady Bird" filmmakers get up close to Oscar: Saoirse Ronan, Sam Levy and Nick Houy made a necessary pit stop on the way in to screening the film at the Academy's New York headquarters. Also Read: ‘Three Billboards’ and ‘Lady Bird’ Stay Strong at Indie Box Office 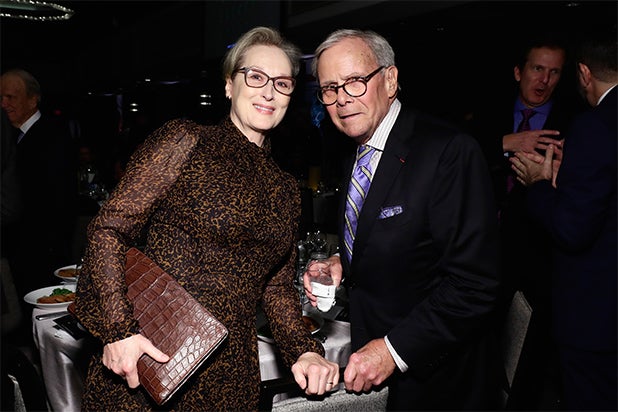 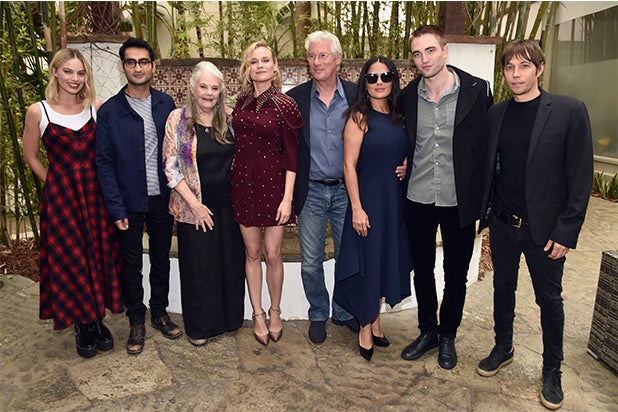 AMPAS
Justin Timberlake ("Wonderwheel") and annual songwriting contender Diane Warren at Hollywood and Highland. When The Party Report caught up with Warren at a recent Golden Globes party and asked for a new music recommendation, she cheekily offered "Stand Up For Something." That's the song she wrote for "Marshall," performed by Common and Andra Day. 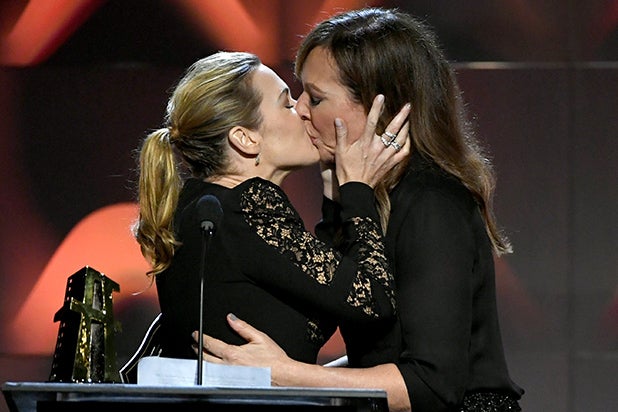 Getty Images
Speaking of love being in the air. The "Call Me By Your Name" guys (Timothée Chalamet and Armie Hammer) flank the new Golden Globe Ambassador, Simone Garcia Johnson. She's The Rock's 16-year-old daughter. Also Read: ‘Get Out,’ ‘Call Me by Your Name,’ ‘Good Time’ Top Indie Spirit Awards Nominations 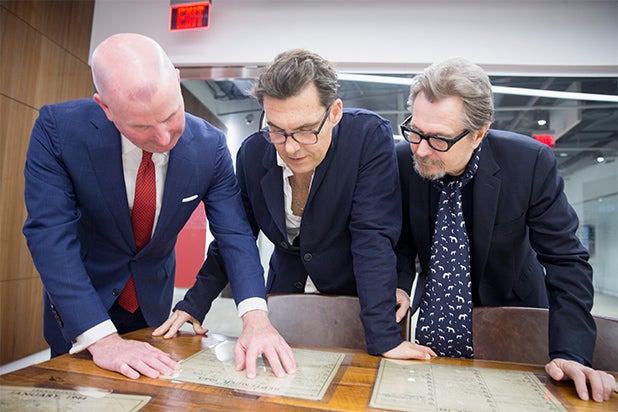 Tasos Katopodis/Getty Images for Focus Features and Comcast/NBC Universal
Director Joe Wright (center) and lead Gary Oldman (right) dig in to the archives at the National Churchill Library in Washington D.C., an epilogue to Oldman's work as Winston Churchill in Wright's "Darkest Hour." 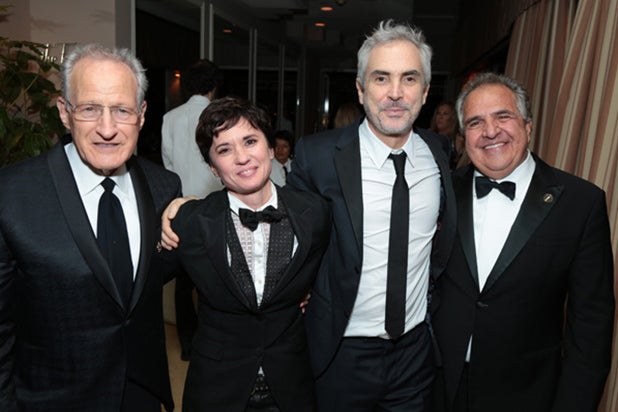 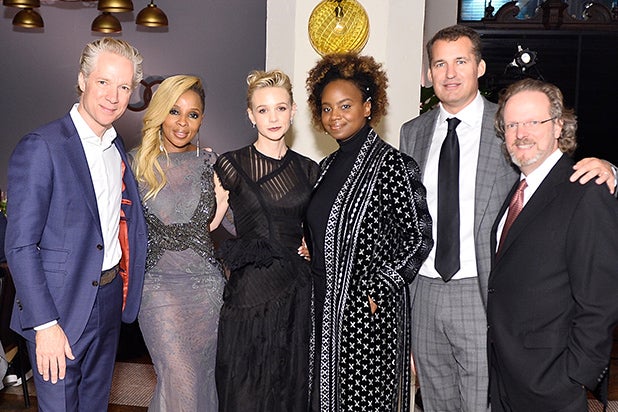 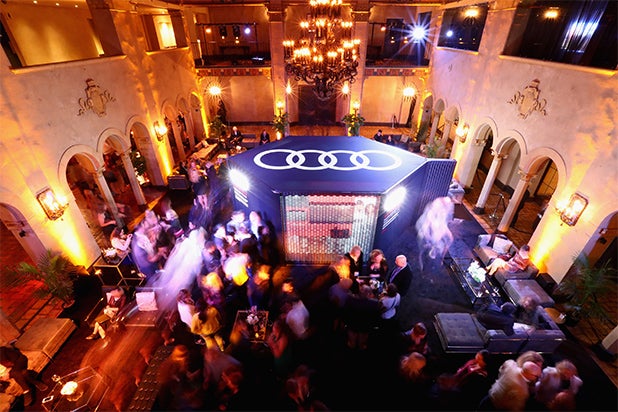 Getty Images
Throughout AFI, the festival's title sponsor Audi curated an installation in the lobby of the Roosevelt. It featured an AFI-produced PSA featuring women in film and spotlights the Audi Fellowship for Women, which was created earlier this year to support one female director and her entire two-year AFI Conservatory enrollment. 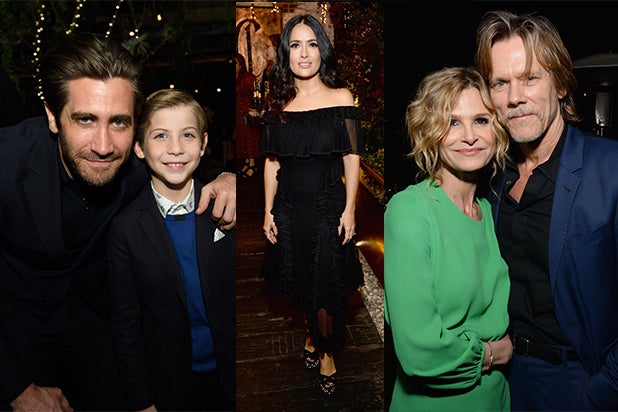