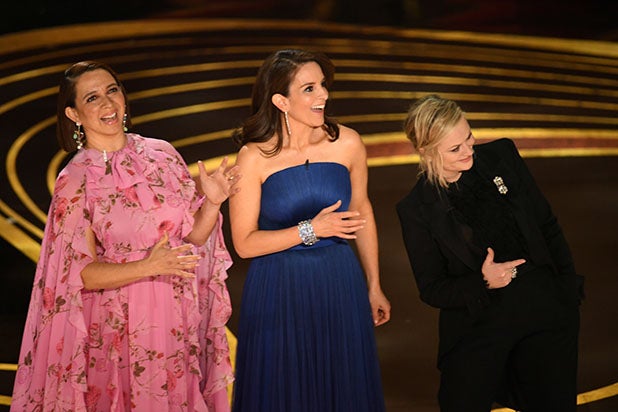 The Oscars were supposed to go hostless this year, but the first set of presenters — “Wine Country” director Amy Poehler and co-stars Tina Fey and Maya Rudolph — ended up delivering what seemed a lot like a traditional opening monologue.

After introducing the show, the trio of “Saturday Night Live” alums came out to present the first award, Best Supporting Actress, and delivered a string of jokes poking fun at the confusion surrounding this year’s Oscars, including comparing since-reversed plans to award a Popular Film category and the Kevin hart hosting drama to Donald Trump’s promise that Mexico would pay for a border wall.

They also lightly razzed a few of the nominees, including “A Star Is Born” director Bradley Cooper and “Black Panther” star Chadwick Boseman.

“Good evening and welcome to the one millionth Academy Awards. We are not your hosts, but we’re going to stand here a little too long so the people who get USA Today tomorrow will think that we hosted.”

“Just a quick update for everybody in case you’re confused, there is no host tonight, there is no popular movie category, and Mexico is not paying for the wall.”

“We won’t be doing awards during the commercials, but we will be presenting commercials during the awards. So if all the winners could please say, ‘Helmann’s Mayonaisse, we’re on the side of food,’ instead of your speeches, that would be great.”

“These Spanx are so tight, they’ve entered my Spider-Verse.”

Also Read: Queen Over Hart During Oscars Opener: Adam Lambert Joins Band to Start With 'We Will Rock You'

“Roma’s on Netflix, what’s next? My microwave makes a movie?”

“Don’t worry Bradley, after four kids, I too have peed myself at the Grammys.”

“Now everyone look under your seats, you’re all getting one of those cheese sandwiches from the Fyre Festival.”

“We’re here to present the award for Outstanding Supporting Actress, although in my experience, all actresses are outstanding supporting actresses because women naturally support each other. For example, I support both of you financially.” “And I hold your boobs while you jog.” “And, Tina, I dub all your dialogue internationally.”