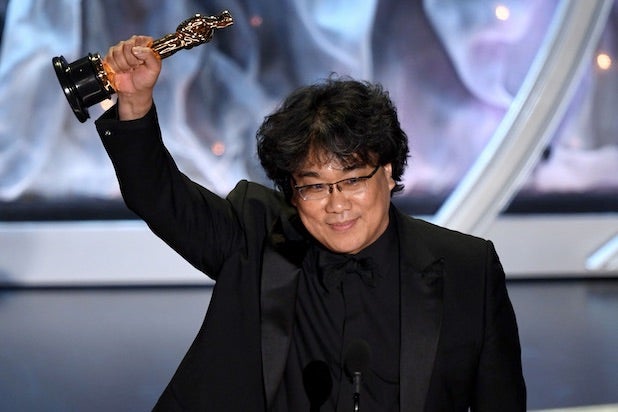 “Parasite” made history at Sunday’s Academy Awards on a number of different levels. It was the first Korean feature to ever win an Oscar, the first Palme d’Or winner to also win Best Picture since “Marty” did it 64 years ago — and, biggest of all, the first film not in English to win the top award in the 92-year history of the Oscars.

The twisted black comedy about class differences, from a director known for horror movies and never before taken seriously by the Academy, beat Sam Mendes’ “1917,” which had won the Producers Guild and Directors Guild awards, usually sure-fire Oscar indicators. It also beat two epics from two massively influential American directors of different generations, Martin Scorsese’s elegiac “The Irishman” and Quentin Tarantino’s consummate “Once Upon a Time … in Hollywood,” as well as the unexpected crowd-pleasers “Jojo Rabbit” and “Joker.”

None of this came as a real surprise, since director Bong’s film had been one of the Oscar frontrunners for months, though it went into the ceremony as a slight underdog to “1917” in the eyes of pundits and bookies. Its road to the stage of the Dolby Theatre at the end of Sunday’s show — which until the end was one of the most predictable Oscar shows in many years — was a long and winding one.

It took a while to get there, though. At first, the question was whether a Korean film could finally land a nomination in the Oscars’ Best International Feature Film category, something the country was never able to do despite 30 previous submissions to what was then called the Best Foreign Language Film category.

But within a month or so of the Cannes Film Festival premiere of “Parasite” in May, and its subsequent Palme d’Or award, it was clear that the international-film category was a given, and more was possible.

So what happened? In a way, you can thank #OscarsSoWhite from 2016 and Alfonso Cuarón from last year. The #OscarsSoWhite protest movement, which arose after two consecutive years of all-white acting nominees, pushed the Academy into an extraordinary push to add women and people of color — and to do that, it reached out around the world and brought in more than 1,000 international members in the last four years. A transformed Academy acknowledged last year that maybe it shouldn’t use the word foreign in referring to non-American cinema, and for the last two years, the organization has been more open than usual to films that were made outside the United States.

This led to Cuarón’s “Roma” being one of the Best Picture front-runners last year, the first time since “Crouching Tiger, Hidden Dragon” in 2000 that a non-English film made a serious run at the top prize. “Roma” ended up losing to “Green Book,” a sign that the Academy was still dominated by older white voters — but by staying in the conversation all season long, eventually winning Best Director and Best Cinematography in addition to Best Foreign Language Film, it proved that an increasingly international Academy was increasingly receptive to international cinema.

And that laid the groundwork for “Parasite” to be taken seriously as an Oscar contender. First, though, it had to survive the barrage of awards movies that came out of Cannes (“Once Upon a Time … in Hollywood”) and out of the fall festivals (“Joker,” “Jojo Rabbit,” “Marriage Story,” “The Irishman” … ).

The two biggest contenders, for a time, appeared to be Tarantino’s “Once Upon a Time … in Hollywood” and Scorsese’s “The Irishman.” The former film may have peaked too early and may have been overestimated by pundits who are convinced that the Academy automatically goes for movies about Hollywood. (They did that with “The Artist” and “Argo,” but more recently they didn’t with “La La Land.”) While it won the Golden Globes comedy award and the Critics’ Choice Award for best picture, it won almost none of the many guild awards for which it was nominated, suggesting that Brad Pitt aside, it was never quite as popular as we thought.

As for “The Irishman,” the Netflix release started strong at the New York Film Festival and got the theatrical run that Martin Scorsese wanted. But by the time voting came around, it was largely available on the streaming site. The deliberately paced three-and-a-half-hour movie could be engrossing on a small screen to viewers who were paying attention, but the format also made it awfully easy to walk away from, or to split up into smaller pieces that didn’t pack the cumulative punch that the entire work does in one sitting.

(It’s also worth noting that the Academy has never particularly warmed up to Scorsese, who has only won Best Picture and Best Director once, for “The Departed,” and whose most-awarded films are “The Aviator” and “Hugo,” not generally thought to rank near the top of his canon.)

As the biggest contenders faded, the field opened up for something new, which was the late-breaking “1917.” For voters who were still inclined to keep a non-English film in the Best International Feature category, Sam Mendes’ war movie stormed into the race with its bravura single-shot approach — it was a movie-movie that could attract all the below-the-line branches in the Academy. It felt like an Oscar movie, and it was backed by the same studio, Universal, that had steered “Green Book” to a victory last year.

So when it won the Producers Guild and Directors Guild, “1917” seemed to be the movie to beat — and yet the wins for “Parasite” never stopped. It won the SAG ensemble award, the all-important American Cinema Editors’ ACE Eddie Awards, the Art Directors Guild, the Motion Picture Sound Editors and then, crucially, the Writers Guild Award for original screenplay, followed a day later by the BAFTA screenplay award as well.

Bong received yet another ovation at the Film Independent Spirit Awards on Saturday — and every place he went and every award he won, there was palpable enthusiasm that outstripped the cheers for almost anybody else.

Over the course of the season, it seemed, Academy voters learned not just to love “Parasite,” but to also love giving it awards, which led to the screenwriting, international feature, director and picture awards that made it Sunday’s most-honored film.

If Jane Fonda’s announcement that it won Best Picture came as something of a shock, it wasn’t because people thought it didn’t have a chance — it was because after last year, there was still doubt that the Academy would go all the way and give its top prize to a film that isn’t in English.

Maybe that means this really is a new Academy. Or maybe “Parasite” is just an anomaly, the right film from the right director at the right time.

Whatever it is, the win added a shot of exuberance to a ceremony that until then had been workmanlike in the way it gave awards to the people and films we thought would get them. The four acting races were sealed long ago, and most of the other awards went to clear favorites, even in the always-tricky sh0rts categories.

And the show itself was steady enough — though for a ceremony that opted to go without a host, it sure acted as if it wanted a host: extended bits by Steve Martin and Chris Rock at the top of the show, Maya Rudolph and Kristen Wiig later in the show, Julia Luis-Dreyfus and Will Ferrell after that; presenters whose only job was to introduce other presenters; and a mid-show recap (albeit from a rapper).

Meanwhile, Netflix, which had led all studios with 24 nominations for the first time ever, only managed two wins, one for Laura Dern in “Marriage Story” and one for the documentary “American Factory.” That’s two less than it received last year with 15 nominations — and its crowning glory, “The Irishman,” became only the fourth film to land 10 nominations and not win a single award. To make matters worse, and to reinforce that Scorsese isn’t exactly the Academy’s bag, two of the four 0-for-10 films are now by Scorsese, “The Irishman” and “Gangs of New York.” (The record for Oscar futility is shared by “The Turning Point” and “The Color Purple,” both of which went 0-for-11.)

Was the predictability a byproduct of the shortened season, with the Oscars taking place on the earliest-ever date of Feb. 9? Quite possibly: Once favorites were established, there was precious little time for dark horses to come along and change the narrative to any appreciable degree.

But there was time for the Academy to fall in love with the idea of loving “Parasite.” And that’s exactly what it did.

The rain didn't keep the head-turning fashions away from the red carpet. Check out the most outrageous looks from the Oscars.