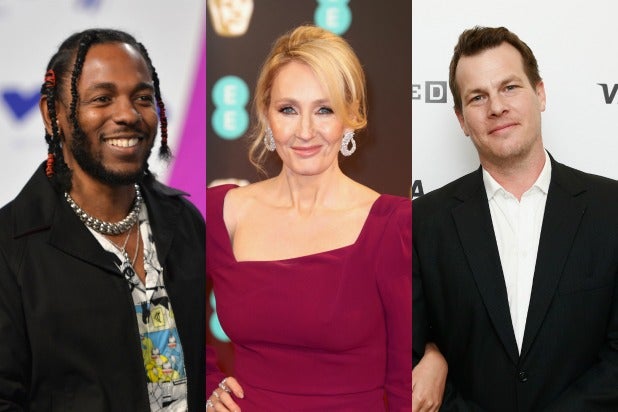 Kendrick Lamar (left), JK Rowling and Jonathan Nolan were among those the Academy included in its record-setting 928 new member invitations.

The Academy of Motion Picture Arts and Sciences announced on Monday a record-breaking number of new member invitees that puts the organization on track to reach its 2016 goals of doubling the number of non-white and female members.

Some of the 928 invitees were quite curious, either because it was surprising they weren’t already members — or that the Academy would even think to induct them.

Consider French-born filmmaker Michel Gondry, who won an Oscar for co-writing his 2004 film “Eternal Sunshine of the Spotless Mind” but somehow never snagged an invite from the Academy until now.

Also Read: Oscars Academy Has Doubled Non-White Members Since 2016, on Track to Double Women Too

Or Jonathan Nolan, who earned a nomination with his brother Christopher for 2000’s “Memento,” but has been passed over all these years despite his acclaimed scripts for “The Dark Knight,” “The Dark Knight Rises” and “Interstellar.”

Then there’s “Harry Potter” creator J.K. Rowling. Sure, the author inspired an entire generation of kids to read rather than head to the cinema — but she only has one produced screenplay to her credit, 2016’s “Fantastic Beasts and Where to Find Them.” (A sequel, “The Crimes of Grindewald,” is due in November.)

Still, Rowling has been crucial to the “Harry Potter” franchise, which has racked up 14 Oscar nominations and $7 billion in worldwide box office since the first one was released in 2001.

If those invitations seemed a long time coming, then rapper Kendrick Lamar nabbing one seemed out of the blue.

Lamar is an objectively outstanding artist who has won nearly every important music award there is. He even won a Pulitzer Prize for his album “DAMN.” but his Hollywood résumé is thin aside from his recent work on the “Black Panther” soundtrack.

The same is true of members of Prince’s band, Wendy Melvoin and Lisa Coleman, who scored membership for their work on such Oscar-bait films as “Just Wright” and “Valentino’s Ghost.”

The 2018 list of invitees is a sign that the Academy is opening its doors a bit wider as it continues to diversify its ranks.