The Academy of Motion Picture Arts and Sciences gained almost 140 voting members over the past year, with the total number eligible to vote for the 88th Academy Awards now standing at 6,261.

The total comes from an official branch count prepared by the Academy on Dec. 14 for Oscars voting that begins on Dec. 30.

Last year, 6,124 members were eligible to vote. The Academy extended membership invitations to a record 322 people in June, but that influx is partly counterbalanced by members who have died or taken non-voting, retired status.

The memoriam page of the AMPAS website lists 77 members who died in 2015.

Most of the Academy’s 17 branches experienced a slight rise in membership since early December 2014, when last year’s branch count was prepared for the 87th Oscars voting.

Only two branches have a smaller membership than they did a year ago, and they are the two largest branches. The Actors Branch, the largest in AMPAS, fell for the third consecutive year. It dropped by 12 members, from 1,150 to 1,138, though it still has more than twice as many members as the next largest branch.

The Cinematographers, Costume Designers, Designers, Executives, Makeup Artists and Hairstylists, Public Relations, Sound and Writers branches all increased between one and nine members.

See video: Obama Ends Press Conference With 'I Got To Get to 'Star Wars 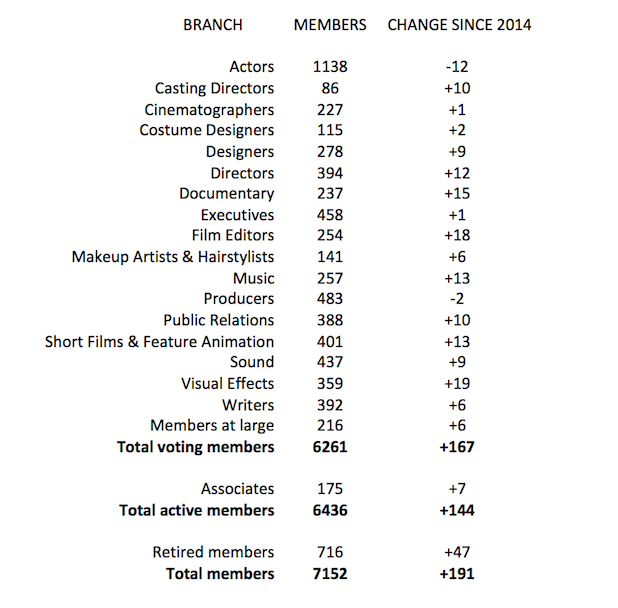