Oscars campaigning may be a marathon, with half of this year’s Best Picture nominees unveiled at the fall festivals in late August and early September, another at Cannes in May and one, “Black Panther,” way back in February 2018.

But to win this particular marathon, you need a strong finishing kick, which is what campaigners have done leading up to and throughout the voting period, which began on Feb. 12 and ends on Tuesday.

Over the years, many films have adjusted their message for the Oscar homestretch, finding new ways to tweak their message to appeal to new sets of voters in the final days of voting. This year, in a wide-open and confounding Best Picture race, many of the top films haven’t really changed the look or the message of their ads much — there are few dramatic new slogans or revamped campaigns.

Also Read: Oscar Race Defies the Experts: With 6 Days to Go, Nobody Knows a Damn Thing

Here’s a look at some of the top films and the messages their final ads are delivering: 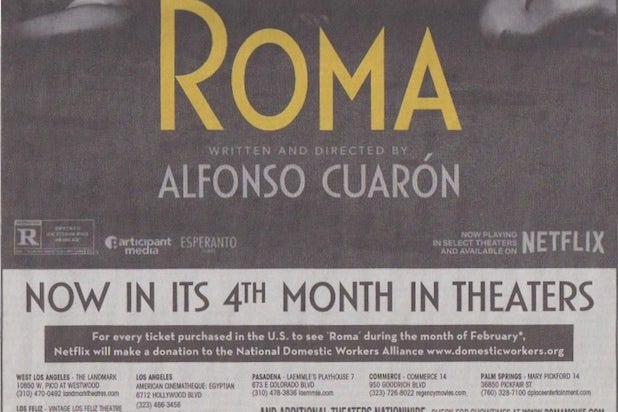 While the handful of central images have remained the same throughout the campaign, the key line in ads recently has been one from the American Film Institute’s citation naming the film one of the year’s best: “‘Roma’ is a monument to the power of film to inspire empathy across the walls of geography, class and culture.”

But a new line has been showing up recently, and it’s crucial. Last week it was “Now it its 12th week in theaters,” this week “Now in its 4th month in theaters.”

Obviously, no other movie in contention brags about how many weeks it’s been in theaters. (For the record, it’s seven for “Vice,” 12 for “The Favourite,” 13 for “Green Book,” 15 for “Bohemian Rhapsody,” 19 for “A Star Is Born” and 20 for the documentary “Free Solo.”) But then, no other movie needs to establish its cinema bona fides the way “Roma” does, with some people ready to dismiss it as a threat to the movie business because it’s from Netflix and has been streaming while also playing in select theaters. 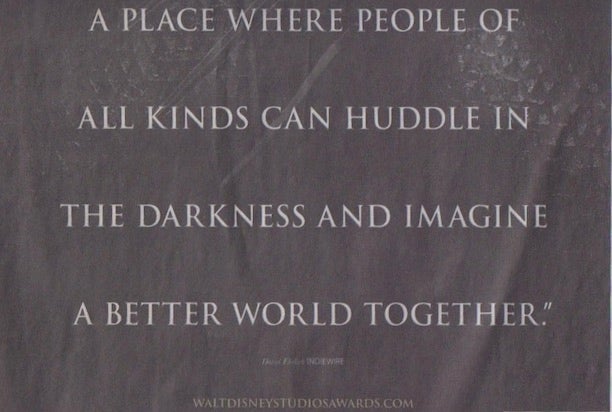 While “Black Panther” has essentially stuck with the look and feel of the ads throughout the season — lots of different pictures and lots of quotes emphasizing the landmark nature of the achievement — one new line showed up in a recent ad.

The quote, which came from Indiewire, emblazoned the entire front page of the Los Angeles Times: “A landmark, game-changing film. ‘Black Panther’ is bold, proud fare that expands the medium at a time when theaters desperately need to be reaffirmed as a place where people of all kinds can huddle in the darkness and imagine a better world together.”

In other words, we’re saving movie theaters from threats like, you know, Netflix. 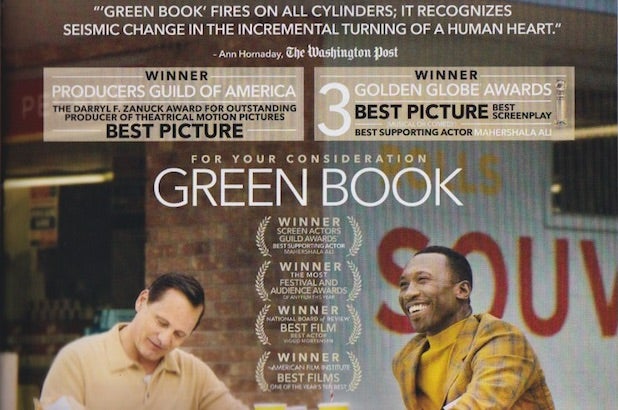 No film has been as widely attacked this season as “Green Book,” which has dealt with controversies related to the past of writer-director Peter Farrelly and writer Nick Vallelonga, the accuracy of its depiction of pianist Donald Shirley (played in the film by Mahershala Ali) and the suitability of being another white man’s look at historic racial injustice from the point of view of the white man.

But the film has positioned itself not as the divisive movie, but as the healing one, with ads that sport photos of stars Viggo Mortensen and Mahershala Ali in affectionate moments, and lines from reviews that include “‘Green Book’ … recognizes seismic changes in the incremental turning of a human heart.” Farrelly has repeated a line tailored both for this Oscar season and the current political climate at awards shows, saying that the movie proves that we can understand one another “if we just talk to each other.” 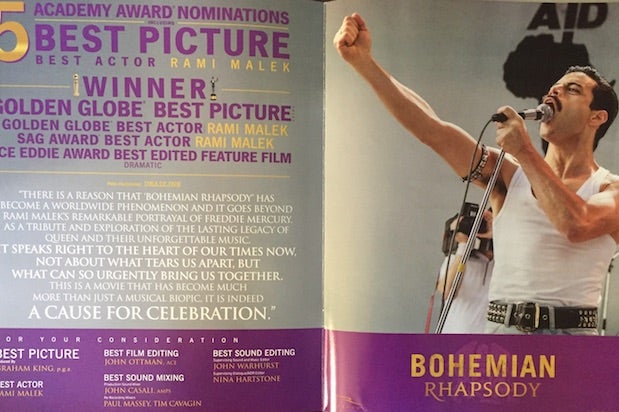 You have to hand it to 20th Century Fox and the “Bohemian Rhapsody” campaign team — they found a review that not only says the crowd-pleasing music bio is “a cause for celebration,” but makes a gushy case for it as a film that “speaks right to the heart of our times now, not about what tears us apart but what can so urgently bring us together.”

That’s highfalutin praise for a movie with by far the lowest critical approval of any Best Picture nominee — but apparently we shouldn’t underestimate the healing power of a good backbeat and a little mustache.

Plus, of course, star Rami Malek dominates every ad — because even people who don’t love the movie love its star. 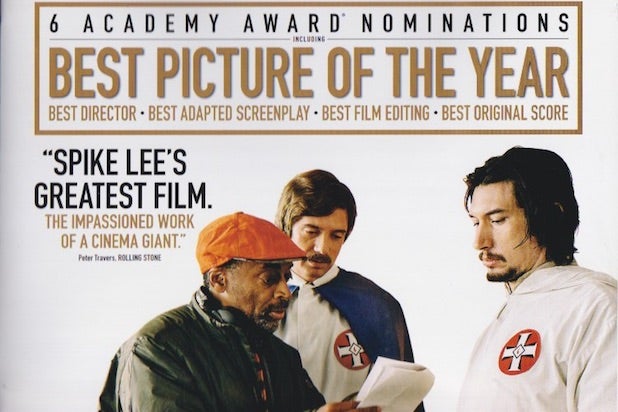 If the director is front-and-center in many “BlacKkKlansman” ads, the reason is simple: Spike Lee is such a legendary filmmaker that he’s won an Honorary Oscar, but he’s never before been nominated for Best Director or Best Picture. So he’s the focus not of every ad, but of many of them, helping to convey the message that Spike is due for a competitive Oscar all his own.

The outspoken Lee has also hit the promo circuit with a vengeance; sometimes he’s on his best behavior and sometimes he’s prickly. And in recent weeks, Lee has managed to make it pretty clear that he doesn’t like “Green Book” without ever mentioning the title, which would be a violation of Oscar campaign rules that prohibit badmouthing an opponent. 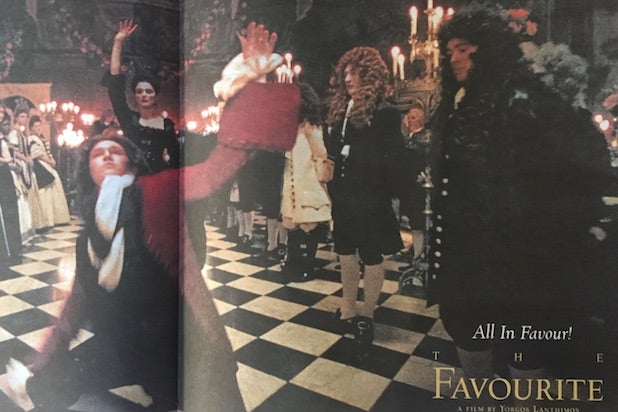 “The Favourite”
Message: Everybody loves us.

While it hasn’t won any major guild awards, Yorgos Lanthimos’ twisted costume drama is a critical favorite and stands its best chance if it can show up high enough on lots of ballots to become the kind of consensus choice that wins under the Academy’s preferential counting system.

So that’s what it emphasizes in the most common tag line in its current ads: “All in Favour!” 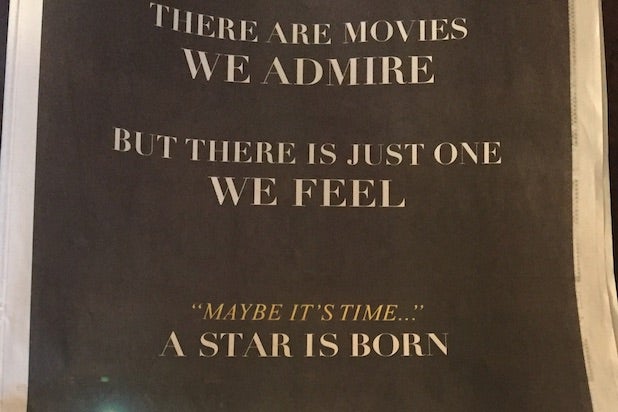 “A Star Is Born”
Message: Come on, have a heart.

Just when it seemed that Bradley Cooper’s remake was sticking with the same kind of ads that had gotten it this far, a new ad popped up in last weekend’s L.A. Times and New York Times. “There are movies we admire,” it read, “but there is just one we feel. Maybe it’s time. ‘A Star Is Born.'”

Is this a subtle slap at the “admirable” “Roma,” or a reminder that “Green Book,” “Black Panther,” “BlacKkKlansman” and/or “The Favourite” aren’t based around love stories the way “A Star is Born” is? Yeah, all of the above.

The line “Maybe It’s Time,” of course, is the title of a Jason Isbell song sung in the movie by Bradley Cooper. (Is it churlish to point out that it’s a better, more nuanced song than the nominated front-runner for Best Original Song, “Shallow?” Because it is.) And it’s an echo of the tagline in Oscar ads for the 2013 Best Picture winner “12 Years a Slave” — “It’s time”) — though the maybe suggests that there’s a bit less urgency and a bit more uncertainty in this case.

In her acceptance speeches, Lady Gaga has been offering another angle, positioning the film as one that does more than make you feel. She said it most recently at the Grammys when she won for duo or group performance: “I just want to say that I’m so proud to be part of a movie that addresses mental health issues.” In other words, “A Star Is Born” is not just a grand romance or an accomplished musical drama, but an important issue movie, with the kind of gravitas that often appeals to Oscar voters.