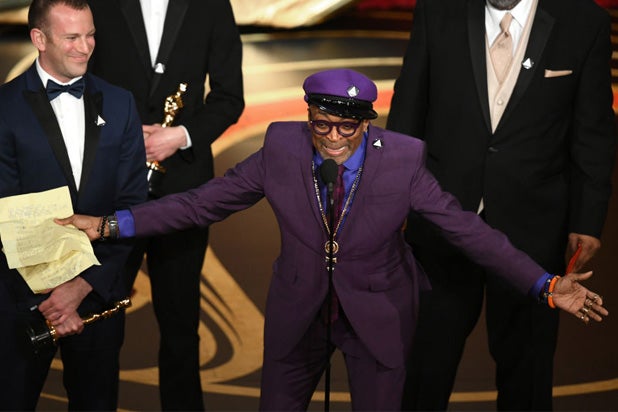 For those of you that missed the start of Spike Lee’s speech after he won Best Adapted Screenplay for “BlacKkKlansman,” — which was everyone who watched the Oscars on TV, since his initial remarks were bleeped out — yep, he swore.

But it’s just because he wanted to make sure he had time to say his whole statement.

“Do not turn that motherf—ing clock on,” Lee shouted.

Lee then read his prepared statements, an expressly political call to action which included: a reminder to the audience that this year is the 400th anniversary of when slaves first arrived in Virginia from Africa; noting that February is both Black History Month, and the shortest month of the year; and a plea for people to vote in 2020 — you can guess what his preferred outcome is.

“Make the moral choice between love versus hate,” Lee said near the end of his speech, sporting the knuckle bracelets worn by Radio Raheem in his signature film. “Let’s do the right thing! You know I had to get that in there.”

Lee was ecstatic over the Oscar win, his first ever in a long career (though he won an honorary Oscar in 2015.) But then again he might also have been fired up by the news that his beloved New York Knicks ended a losing streak by defeating the San Antonio Spurs on Sunday night. Presenter Samuel L. Jackson went off script to update Lee on the team’s record as soon as he stepped out onstage with his “Captain Marvel” co-star Brie Larson. Come to think of it, that might also be why Lee jumped into Jackson’s arms when he walked up to accept his Oscar.

Lee won along with Charlie Wachtel, David Rabinowitz and Kevin Willmott for the script, which is based on the book by Ron Stallworth.

Spike Lee, Julia Roberts and Mike Myers are among the stars who made it big with a little help from some pizza

You'll be hard pressed to find a franchise that has found such longevity in such a ridiculous concept as "Teenage Mutant Ninja Turtles." The series is loaded with bizarre quirks, with one of the most famous being the turtles' undying love for pizza -- as in the series' product placement-heavy 2014 live-action remake. It's one of the most well-known examples of this foodstuff in modern cinema, but it's far from the only one.
View In Gallery