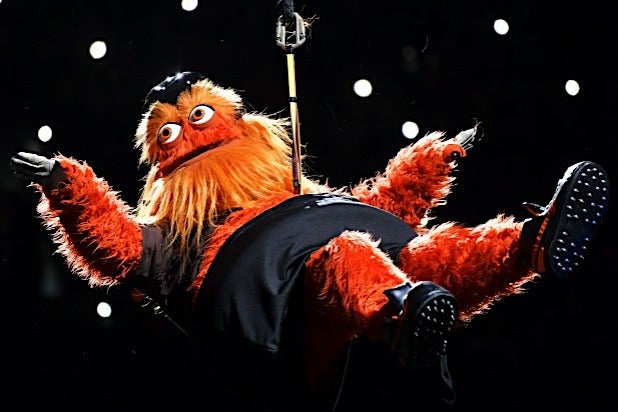 With the Motion Picture Academy scrambling for a new host of the Oscars’ February telecast, Philadelphia Flyers fans on Twitter are asking, why not Gritty?

Less than 48 hours after accepting the Oscars hosting gig, Kevin Hart dropped out after old homophobic tweets from him surfaced on the internet. That put the Academy in quite a pickle.

Since Gritty’s debut earlier this year, the new mascot for the Philadelphia Flyers has been embraced as an internet meme and American treasure despite — or perhaps because of — his googly eyes and creepy, hairy appearance. Even as the Flyers languish near the bottom of the NHL Eastern Conference standings, Gritty has made this season a memorable one for fans with his antics, including dumping a boy who wanted to fight him on the ice into the penalty box.

And with ratings for the Academy Awards dropping and reports that there are very few Hollywood stars interested in hosting, Philly sees an opportunity to make Oscar night a little less gold and a little more orange.

It’s hard to imagine who would want to jump in and take this often thankless job. Many film critics and Oscars fans online have thrown out suggestions, bur here are some of the tweets in support of Gritty.

It’s funny that we joke about other potential Oscar hosts like any of them could defeat Gritty.

Gritty as the Oscar host.

It is a totally silent 3 and a half hour. At the end he beheads the Pittsburg Penguin’s Mascot.

people who should host the oscars:
-d'arcy carden and ted danson
-the dog from widows
-the entire cast of ocean's 8, trading off thru the night
-gritty
-the ghost of carrie fisher
-my mom
-sandra oh and andy samburg
-the fab 5 but ONLY if antoni is wearing a little life t-shirt