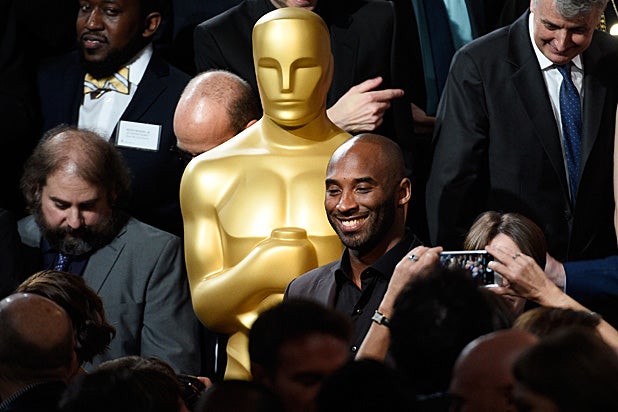 Kobe Bryant became the first person to win both a sporting championship and an Oscar on Sunday with his victory in the Best Animated Short Film for “Dear Basketball.”

The five-time NBA champion with the Los Angeles Lakers beat out “Garden Party,” “Lou,” “Negative Space” and “Revolting Rhymes” in the short category for his collaboration with animator Glen Keane.

In his acceptance speech as he took the stage with Keane, Bryant aimed a swift jab Fox News host Laura Ingraham, by saying basketball stars shouldn’t just “shut up and dribble.”

Ingraham came under heavy fire last month for criticizing LeBron James and fellow NBA star Kevin Durant for making anti-Trump comments in an interview with ESPN’s Cari Champion for “UNINTERRUPTED,” saying they shouldn’t comment on politics and should “shut up and dribble.”

Durant went on to say that he thought Ingraham’s on-air comments were “racist,” while James responded in a simple Instagram post, stressing “I am more than an athlete.”

Also Read: LeBron James Is Determined to 'Talk About What's Really Important,' Will Not 'Shut Up and Dribble'

As for Bryant’s latest accolade, the only person who came close to awards success in both sports and Hollywood is Steve Tisch, chairman and executive vice president of the New York Giants, which is co-owned by his family.

In 1995, film producer Tisch won the Best Motion Picture Oscar for “Forrest Gump,” which was nominated for 13 Academy Awards and won six. He then added two Lombardi Trophies to his collection when the Giants beat the New England Patriots in Super Bowl XLII and XLVI.

“Dear Basketball” features Keane’s line drawings to animate the poem that Bryant wrote to announce his retirement from the NBA in 2016. The short first premiered at the Tribeca Film Festival.

“This is … a form of validation for people to look and say, ‘OK, he really can do something other than dribble and shoot.”

Keane is the award-winning animator behind “Aladdin,” “Beauty and the Beast” and “The Little Mermaid,” while Bryant was an NBA All-Star 18 times during his two decades with the Lakers.