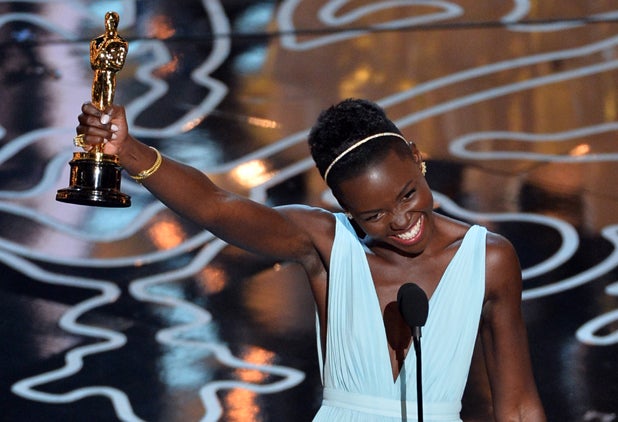 If you had Lupita Nyong’o crying in your Oscar pool, congratulations — you’re both winners!

The “12 Years a Slave” actress gave an emotional acceptance speech at the Academy Awards after winning an Oscar for her supporting performance in Steve McQueen‘s slavery drama.

Following a long embrace with her brother, who snuck into Ellen DeGeneres’ star-studded selfie, Nyong’o hugged McQueen before being intercepted by Liza Minnelli. Eventually, Nyong’o made her way to co-stars Brad Pitt and Chiwetel Ejiofor, the latter of whom she thanked for his fearlessness in portraying Solomon Northrup.

Wearing a gorgeous light blue dress, Nyong’o saluted “the spirit of Patsey” and thanked the real-life slave for her guidance in shaping Nyong’o’s performance.

Nyong’o, who trained at the Yale School of Drama (which got a shout-out), made sure to credit McQueen for “charging everything you fashion with a breath of your own spirit. Thank you so much for putting me in this position. This has been the joy of my life.”

The actress also said co-star Michael Fassbender was her “rock,” and credited several below-the-line crew members including cinematographer Sean Bobbitt. “I could not be here without your work,” said a humble Nyong’o, who had a strong closing line.

“No matter where you’re from, your dreams are valid,” concluded Nyong’o.