Next to scoring a seat at the Dolby Theatre for the Oscars itself, Hollywood’s preferred station for consuming the Chris Rock-hosted telecast was Elton John‘s annual Oscar night viewing party and fundraiser.

The room collectively cheered for Lady Gaga, had group-shock at Mark Rylance‘s Best Supporting Actor win over Sylvester Stallone, and emptied their wallets to raise $6.2 million. 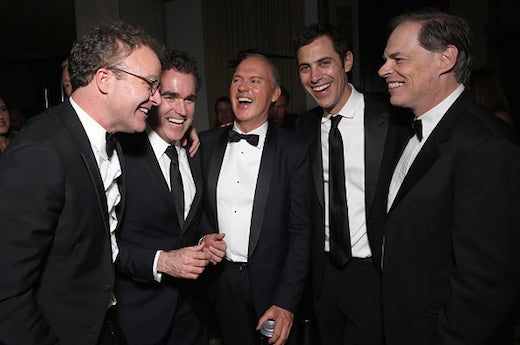 After the telecast ended, the party circuit moved on to “Spotlight’s” victory party, a wall-to-wall bash where appropriately, the crowd included a lot of journalists.

See below for the hottest moments of the night. 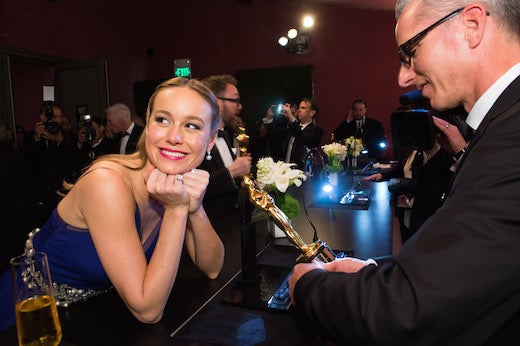 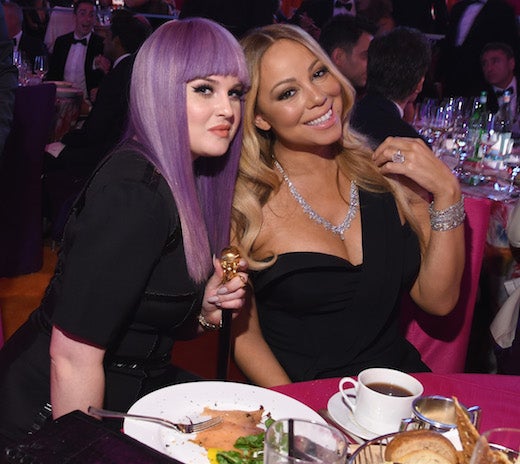 4:57 p.m.
A talent escort plucks Melanie Griffith out of line to thrust her to the red carpet. Mariah Carey is just ahead with what appears to be her own video crew.

6:45 p.m.
Sir Elton does not determine the seating at his head table until the day of the event, organizers have told TheWrap in the past. On Sunday night, it’s heavy on musicians. Beck sits on John’s right, Sheryl Crowe on his left, and Universal Music CEO Lucian Grainge is there too. New England Patriots owner Robert Kraft would be the odd man out professionally at this musical head table, but he’s hosting Beyonce at Gillette Stadium in June, so that counts. 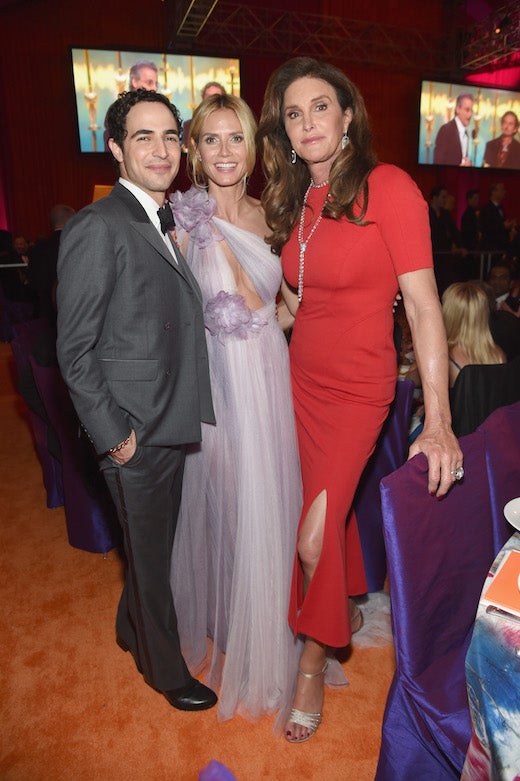 7:02 p.m.
Makeup company MAC also has hot pod of tables. Caitlyn Jenner, who announced a business partnership with the company last week, sits next to Estee Lauder Executive President John Demsey. Zac Posen and Dita Von Teese round out this table, as Mariah Carey anchors a second table next door.

8:14 p.m.
During Lady Gaga‘s performance, Elton John is glued to the screen. The two put on a surprise concert on the Sunset Strip in West Hollywood the day before to thank the city for their support of the foundation. Later in the night, Elton would escort Gaga down the carpet at Vanity Fair. 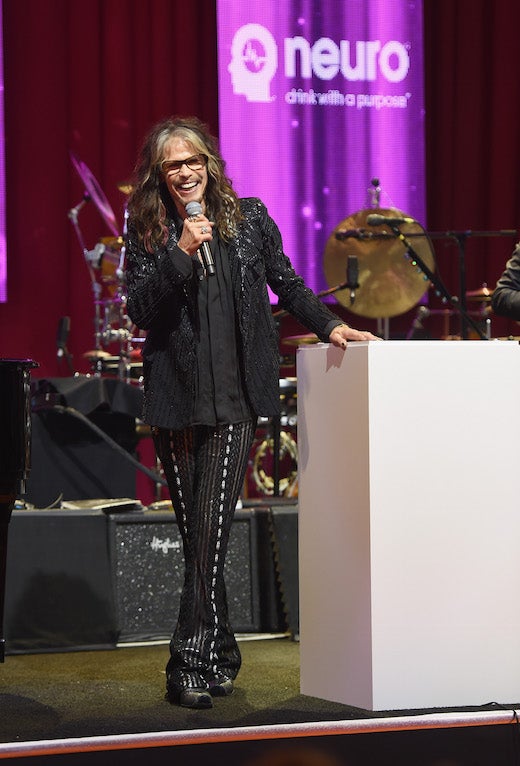 9:09 p.m.
Steven Tyler personally hawks a five-day stay at his “Maui Happy Place,” a mansion on the Hawaiian island. “It’s big enough to entertain Charlie Sheen and his entire entourage,” Tyler jokes to the crowd, as it sells for $80,000 during a live auction. On the whole, the “Wonderful Crazy Night” — named in honor of Elton’s new album — raises $6.2 million.

9:21 p.m.
Two-time Oscar winner Hilary Swank slides a ring off her finger and gives it to the auctioneer. After the gavel falls on it for $40,000, she hugs Russell Simmons before going back to her seat.

9:40 p.m.
“South Park” creator Trey Parker is in the mix bidding for two tickets to leave Elton John and go to the Vanity Fair party in Beverly Hills. The “cars are revving,” the auctioneer taunts. Parker drops out before the tickets sell for $110,000.

9:58 p.m.
Vince Vaughn is in the crush of guests arriving in the second wave of the night for Elton’s live performance. 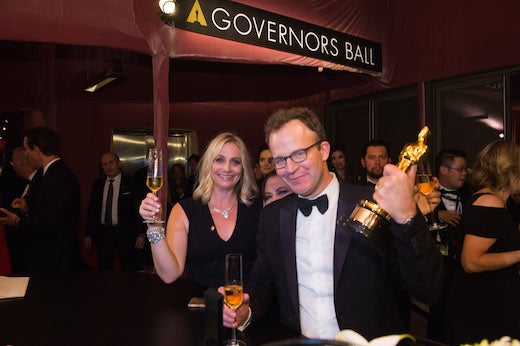 Earlier at the Governors Ball, Tom McCarthy and his statuette (AMPAS)

10:10 p.m.
Over at Palihouse in West Hollywood, the lobby bar is packed awaiting the arrival of the “Spotlight” victors.

10:12 p.m.
After a wardrobe change from earlier in the night, Elton is performing classics like “Tiny Dancer” and sprinkling in new songs from “Wonderful Crazy Night.” He’ll change back in to his original outfit for Vanity Fair.

11:04 p.m.
Nearly an hour later, the Open Road/Participant/First Look Media/Anonymous Content crowd is still waiting on the winners in a crescent shape at the bottom of the stairs …

11:12 p.m.
… and Brian D’Arcy James (who played Boston Globe reporter Matt Carroll) is the first cast member to arrive. A big “whoop” goes up in the room. Meanwhile at Elton John, Charlie Sheen has arrived. 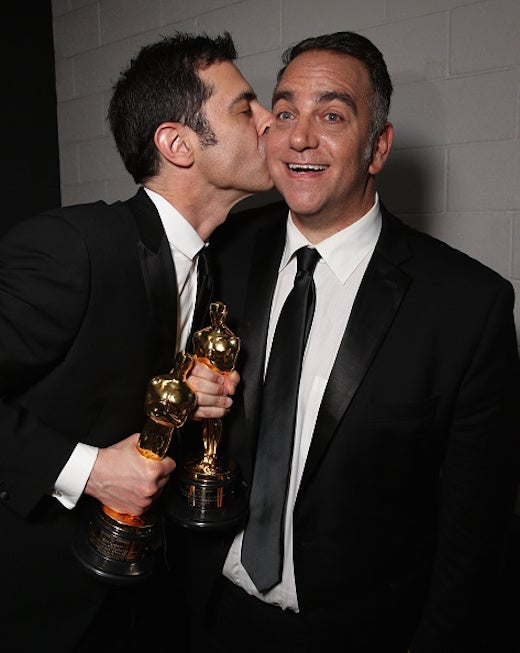 After the "Spotlight" surprise win closed the night, they celebrated at Palihouse in West Hollywood, as Vanity Fair took over Beverly Hills, and Charlie Sheen made a statement with his t-shirt at the Elton John party.