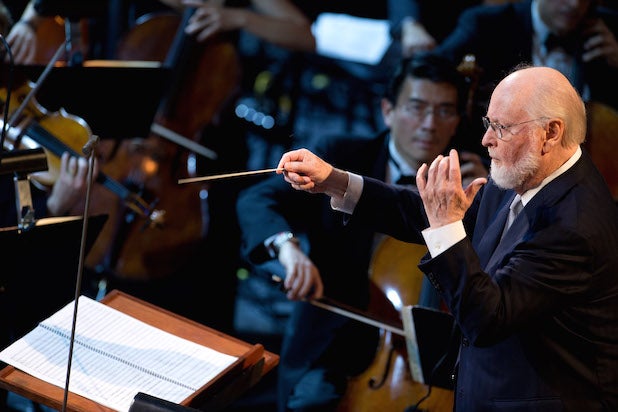 John Williams is officially in the running for the 51st Oscar nomination and sixth win of his career, with the veteran composer’s score for Steven Spielberg’s “The Post” and Rian Johnson’s “Star Wars: The Last Jedi” being two of 141 film scores that have qualified for the Academy Award for Best Original Score.

A nomination would place the 85-year-old composer eight awards shy of Walt Disney’s record of 59 Oscar nominations. He is currently in second place, and is the most-nominated living person.

The Academy announced the qualifying composers and film scores on Thursday, with a number of past Oscar winners joining Williams on the list: Alexandre Desplat for “The Shape of Water” and “Suburbicon,” Mychael Danna for “The Breadwinner” (with his brother Jeff) and “The Man Who Invented Christmas,”  Michael Giacchino for “Coco,” “The Book of Henry,” “Spider-Man: Homecoming” and “War for the Planet of the Apes,” Marianelli for “Darkest Hour” and Hans Zimmer for “Dunkirk” by himself, “Blade Runner 2049” with Benjamin Wallfisch and “The Boss Baby” with Steve Mazzaro.

Alan Menken was deemed eligible for his new score to the live-action musical “Beauty and the Beast,” after winning the Oscar 25 years ago for the score to the animated film on which the new movie is based.

Scores that have already been nominated for both the Golden Globes and the Critics’ Choice Awards include Williams for “The Post,” Zimmer for “Dunkirk,” Desplat for “The Shape of Water” and Jonny Greenwood for “Phantom Thread.” A Golden Globe nomination also went to Carter Burwell for “Three Billboards Outside Ebbing, Missouri,” while Critics’ Choice nominations also went to Marianelli and to the team of Zimmer and Wallfisch for “Blade Runner 2049.”

Of the 141 qualifying scores, 15 are collaborations between two composers. Another, “The Second Coming of Christ,” is credited to three composers, while the Indian film “Lake of Fire” is credited to Qutub-E-Kripa, which is the name not of a single person but of a group of musicians and composers assembled by AR Rahman.

In the past, the Academy made it very difficult for composing teams to be nominated, but the rules have loosened in recent years.

In a sign of just how male-dominated the world of film music is, only six of the 141 scores were written or co-written by women. Two of those were by Rachel Portman and another two by the Academy’s first female governor from the Music Branch, Laura Karpman.

Last year, 145 scores qualified; the three years before that, the total remained between 112 and 114.

Members of the Academy’s Music Branch will vote for their five favorites between January 5 and January 12, with nominations announced on January 23.

The work of the nominees will be showcased at the Oscars Concert on February 28, four days before the 90th Academy Awards.

Common, Elvis Costello, Raphael Saadiq join in discussion of the art and craft of writing award-worthy songs for the big screen