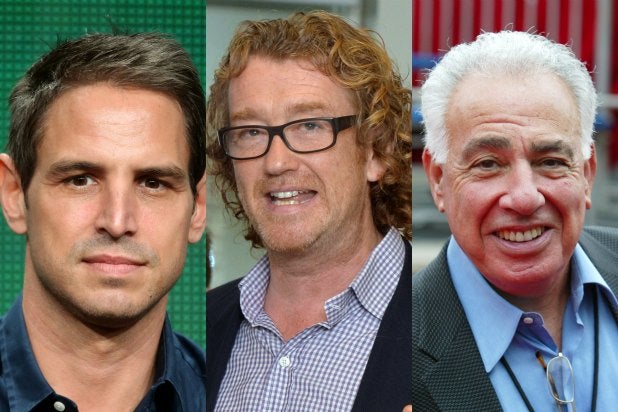 Most of the production staff has worked on one or both of Zadan and Meron’s two previous Oscar shows: Hamilton directed last year’s show and McLane designed both of the producers’ previous shows, while supervising producer Seligman has worked on more than 30 Oscar shows and lighting designer Dickinson on 25.

Director Hamish Hamilton returns to the show for the third time, after receiving an Emmy nomination for his work on last year’s telecast.  He made his Oscar debut with the 82nd Academy Awards telecast in 2010.  Hamilton has directed many other celebrated live televised events, including the 2014 Super Bowl halftime show featuring Bruno Mars, the 2013 Super Bowl halftime show featuring Beyoncé, the 2013 “MTV Video Music Awards” and the opening ceremonies of the 2012 London Olympics, for which he also received an Emmy nomination.  He shared a 2011 Peabody Award for the fifth annual “CNN Heroes: An All-Star Tribute” and a 2003 Grammy Award nomination for the musical special “Robbie Williams – Live at the Albert.”

Production designer Derek McLane has been part of both Oscar shows that Zadan and Meron have produced.  He won a 2014 Emmy for his production design of the 86th Academy Awards, and earned a nomination in the same category the previous year.  McLane also has designed sets for numerous acclaimed Broadway and Off-Broadway shows; he has received four Tony Award nominations and won the award in 2009 for his work on “33 Variations.”  McLane’s designs can currently be seen in “Beautiful: The Carole King Musical.”  His other Broadway credits include “The Heiress,” “Nice Work If You Can Get It,” “Gore Vidal’s The Best Man,” “Follies,” “Anything Goes,” “Bengal Tiger at the Baghdad Zoo,” “Grease” and “I Am My Own Wife.”  McLane’s television credits include “The Sound of Music Live!” which was executive produced by Zadan and Meron.

Choreographer Rob Ashford has worked on the last two Oscar telecasts as well as the 81st Academy Awards show, for which he won an Emmy.  He was recently nominated for a Directors Guild Award for his work on “The Sound of Music Live!”  Ashford has been nominated for eight Tony Awards and won for Best Choreography in 2002 for “Thoroughly Modern Millie.”  His other Broadway choreography credits include “The Wedding Singer,” “Curtains,” “Cry-Baby,” “Evita” and “Cat on a Hot Tin Roof.”  He also has served as choreographer on such feature films as “A Million Ways to Die in the West” and “Cinderella,” due out next year.

Writer, producer and director Greg Berlanti joins the team as head writer for his first Oscars telecast.  Berlanti’s writing credits include the television series “The Flash,” “Arrow,” “Everwood” and “Dawson’s Creek,” and the feature films “Wrath of the Titans” and “Green Lantern.”  Berlanti also has executive produced such series as “The Mysteries of Laura” and “Brothers & Sisters” as well as the miniseries “Political Animals,” for which he received an Emmy nomination.  His directing credits include the 2010 film “Life as We Know It.”

Zadan and Meron have brought in Michael Green, Seth Grahame-Smith and Andrew Kreisberg to complete the writing staff.  Green is a writer and producer whose writing credits include the feature film “Green Lantern” and the television series “Everwood” and “Heroes.”  Grahame-Smith is a writer and producer known for his work on the television series “The Hard Times of RJ Berger” and such films as “Dark Shadows” and “Abraham Lincoln: Vampire Hunter.”  Kreisberg, a longtime writer and producer, has written episodes of “The Simpsons,” “Boston Legal,” “Fringe,” “Arrow” and “The Flash.”

Music director Stephen Oremus makes his Oscar debut this year.  A music director and Tony Award-winning orchestrator, he has worked on Broadway shows including “Avenue Q,” “Wicked,” “All Shook Up,” “9 to 5,” “The Book of Mormon” and “Kinky Boots.”  The latter two shows, which are still running, earned him 2011 and 2013 Tony Awards for Best Orchestration.  Oremus also served as the orchestra conductor and music director for Rufus Wainwright’s Carnegie Hall and London Palladium tributes to Judy Garland in 2006 and 2007.  He did his first feature film work on 2011’s “Shame,” arranging and producing “New York, New York,” which was sung by actress Carey Mulligan.

Costume designer Julie Weiss returns to the show after working on the 85th and 86th Academy Awards.  Weiss has designed costumes for more than 40 feature films, and received Oscar nominations for her work on “12 Monkeys” and “Frida.”  Her other feature credits include “Steel Magnolias,” “Searching for Bobby Fischer” “Fear and Loathing in Las Vegas,” “A Simple Plan,” “American Beauty,” “Auto Focus,” “Bobby,” “Blades of Glory” and “Hitchcock.”  Weiss earned Emmys for her work on the TV movie “The Dollmaker” and the miniseries “A Woman of Independent Means.”  Her Broadway credits include “The Elephant Man,” for which she earned a Tony nomination, “Cat on a Hot Tin Roof” and “Ann.”  In 2011 she received the Costume Designers Guild Career Achievement in Film and Television Award.

Also rejoining the production team are supervising producer Michael Seligman, co-producer Lee Lodge and lighting designer Robert Dickinson.  Seligman has more than 300 major television events to his credit and has earned 12 Emmy nominations, including 10 for his work on Oscar telecasts.  Seligman’s other producing credits include “The American Giving Awards,” “America Celebrates July 4th at Ford’s Theatre,” “Stand Up to Cancer” and “Return to the Titanic…Live!”