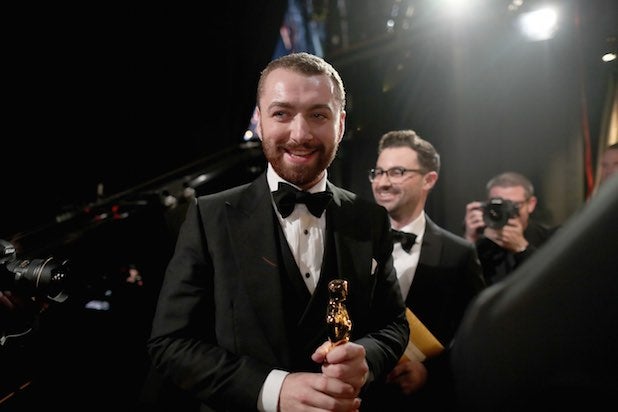 Sam Smith may have dedicated his Oscar win on Sunday “to the LGBT community around the world,” but he forgot about a bunch of openly gay male Oscar winners who came before him.

“I read an article a few months ago by Sir Ian McKellen, and he said that no openly gay man had ever won an Oscar, and if this is the case, even if it isn’t the case, I want to dedicate this to the LGBT community all around the world,” he said.

The singer, who won the Best Original Song Academy Award for “Spectre” theme “Writing’s on the Wall,” may be slightly embarrassed to learn that a number of gay people have won Oscars in the past, and even more embarrassed that he misread McKellan’s quote, which was specifically discussing the Academy Award for Best Performance by an Actor in a Leading Role.

“No openly gay man has ever won the Oscar; I wonder if that is prejudice or chance,” McKellen told The Guardian in January.

But Sir John Gielgud, an openly gay male actor, did win Best Actor in a Supporting Role in 1981 for his performance in “Arthur.” More recently, Dustin Lance Black won an Oscar in 2009 for writing “Milk.” And Pedro Almdóvar won for writing 2002’s “Talk to Her.”

And how could Smith have forgotten a fellow Brit Elton John, who won an Oscar for 1994’s Best Original Song “Can You Feel the Love Tonight” from “The Lion King”?

There have been many gay Oscar winners in the music categories, including composer John Corigliano (“The Red Violin”), Stephen Sondheim (for the “Dick Tracy” song “Sooner or Later”) and Howard Ashman, a gay lyricist who died from AIDS complications in 1991.

Ashman’s first win came for Best Original Song “Under the Sea” from 1989’s “The Little Mermaid.” Then, he was posthumously honored in the same category in 1991 for the song “Beauty and the Beast” from the film of the same name.

Bill Condon, an openly gay filmmaker, won an Oscar in 1999 for writing the screenplay to “Gods and Monsters,” which he also directed. Before him, John Schlesinger won an Oscar in 1970 for directing “Midnight Cowboy.” “True Blood” creator Alan Ball, who has said he came out as gay to his mother when he was 33, won an Oscar in 2000 for writing “American Beauty.” And Scott Rudin won for producing “No Country for Old Men.”

“Mary and Max” director Adam Elliot thanked his boyfriend on stage in 2004 when he won an Oscar for Best Animated Short Film “Harvie Krumpet.”

Smith did specify “openly gay man” in his acceptance speech, but for the sake of living up to the headline of this article, singer-songwriter Melissa Etheridge also won an Oscar for the Best Original Song in 2007.

Despite mistakenly identifying himself as the first openly gay man to win an Oscar (with the caveat that it might not have actually been “the case”), his tribute to the LGBT community has been garnering praise. Watch Smith’s acceptance speech below.

And if we’re forgetting more openly gay Oscar winners, do us a favor and shout them out in the comment section below.