Fans wondering about the chemistry between The Joker and Harley Quinn in “Suicide Squad” got a sneak preview during Sunday’s Oscar ceremony, as Jared Leto and Margot Robbie strolled onstage to present the award for Hair & Makeup.

How did they look together? Good enough that the Internet instantly demanded they become a couple and gave them the celebrity couple name “jargot.”

They were the perfect pair to talk about makeup and prosthetics given the multicolored pigtails Robbie will be rocking as Quinn, and Leto’s pale, tattooed skin as The Joker. (In DC Comics lore, Quinn is The Joker’s psychologist turned partner in crime.)

Leto even slipped in a joke about a merkin. (Google it.) The joke came as Leto noted that hair & makeup artists handle prosthetics, hair, and so much more.

And Leto as The Joker: 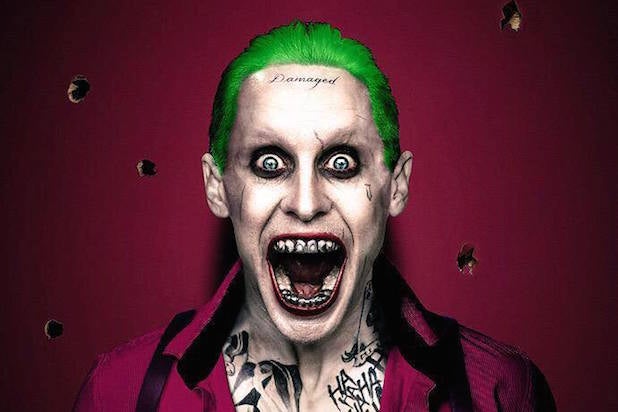 “Suicide Squad,” which premieres August 5, 2016, features a team of super villains doing dirty jobs for the government to lessen their sentences for hellacious crimes. Quinn and Joker will find themselves in a love triangle with Deadshot, played by Will Smith.

Director David Ayer has reportedly said Quinn’s arc is “about her breaking free of The Joker and becoming this fully actualized, independent person. That really is a metaphor for everyone’s journey here.”

From the soundtrack to the powerful female characters, TheWrap takes a look at what’s driving the buzz behind one of the year’s most anticipated movies

Fans got a good glimpse at "Suicide Squad" duringÂ Comic-Con last year (and on the Internet shortly thereafter), but Warner Bros. debuted on Tuesday what the studio is considering the first official trailer, and fans are more pumped than ever. And for good reason, too. The two-and-a-half-minute preview of the Aug. 6 release about a group of DC supervillains teaming up to fight for the government had no shortage of exciting moments. From the soundtrack to the kick-ass ladies that might outshine the men, here are five reasons the "Suicide Squad" trailer blew fans away.

1. Queen The outstanding trailer is set to Queen's "Bohemian Rhapsody," and it's one of the coolest uses of the song on film since Wayne Campbell, Garth Algar and the rest of the "Wayne's World" crew banged their heads and sang along to the classic rock song in 1992. https://twitter.com/GregAndree71/status/689860904641564674 And the trailer made those who somehow managed to never hear the song before instantly fall in love with it. https://twitter.com/NightingaleRiot/status/689861609280421888

2. Sense of Humor Christopher Nolan's "Dark Knight" trilogy and Zack Snyder's "Man of Steel" showed the world that Warner Bros. takes DC superheroes very seriously, but the first official trailer for "Suicide Squad" immediately informs viewers that there will be a delightful change of pace, and writer-director David Ayer didn't take a tale about supervillains saving the world too seriously. Our favorite moment? Too many gems to choose from. Task agent Rick Flagg (Joel Kinnaman) running down the list of squad members and describing mutant bad guy Killer Croc was pretty great: "He's a crocodile and he eats people." But it was Harley Quinn that perfectly demonstrated the playful tone of the film that is already making fans grin. https://twitter.com/Gaymer813/status/689860781446332416

3. The Joker DC fans hold The Clown Prince of Crime in very high regard, so it's no surprise theyÂ were excited for more glimpses of Jared Leto's portrayal of The Joker. Most exciting of all of them was the quick shot of him diving into a vat of chemicals, and pulling his twisted love interest and sidekick Harley Quinn to the surface of the green goo, suggesting her origin story will be fully explained. https://twitter.com/J_Wade21/status/689862360719294464

4. Harley Quinn As much as fans want to see The Joker, it's becoming more and more apparent that audiences will likely leave theaters with the psychiatrist-turned-nutjob as their new favorite villain. It's the first time moviegoers will get to see the comic book character come to life on the big screen, and Margot Robbie's embodiment of HarleyÂ Quinn seems to have the best chance of going down in history as one of the best DC movie villains yet. From the first shot of her sipping tea in her cell to her displays of action prowess, and all the way to the final shot of the trailer (during which she steals a purse because "we're bad guys, it's what we do."), it seems this female supervillain will steal the show from her male counterparts. https://twitter.com/SUPEROSFAN/status/689860889189609472 https://twitter.com/JarettSays/status/689644778770673664 Speaking of powerful females...

5. Girl Power Disney's Marvel may have already taken over the world, but the rival studio has been criticized for not focusing on the many powerful ladies at itsÂ disposal. Meanwhile, DC has "Wonder Woman" blazing into theaters soon, but before that, audiences will get to see three more in action: Quinn, Enchantress (Cara Delevingne) and Katana (Karen Fukuhara, pictured above). Considering how much screen time was given to Quinn in the trailer, it seems she'll be taking the lead, but the trailer also promises "some fun" from Enchantress, while Katana will be using her weapon of choice to slice and dice her way through the mission. https://twitter.com/AhnafFami/status/689861450337226755

What was your favorite moment from the "Suicide Squad" trailer? Let us know in the comment section below.