The 2016 Oscar weekend pre-party theme: When a nominee shows up, give them a microphone.

From power director pow-wows at Bad Robot (Steven Spielberg and J.J. Abrams), to Jennifer Lawrence and Eddie Redmayne staking out opposite corners of West Hollywood, here are the top takeaways, seen and heard from the show before the show.

Jennifer Lawrence took over Hyde Sunset after taking the mic from Women in Film L.A. President Cathy Schulman on Friday night. Before hopping off the stage, she ended her remarks to the crowd with this message, “Equal pay for women!” 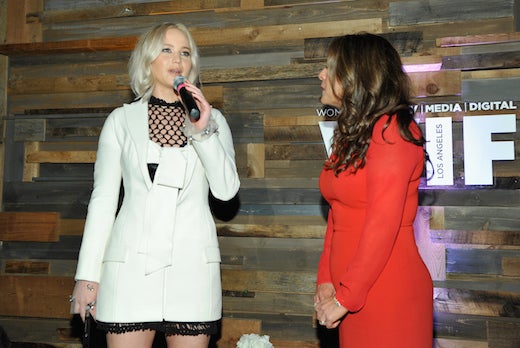 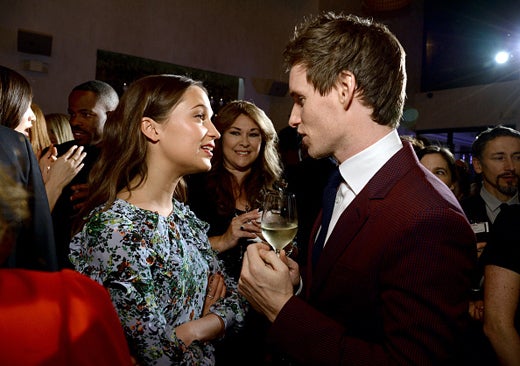 At the same time that Jennifer Lawrence commanded one mic on Sunset, Eddie Redmayne hopped on stage at the temporary British Hollywood embassy on La Cienega, the Film is GREAT Reception at Fig and Olive.

Last year’s Best Actor winner came pre-loaded with stats that would make an actual ambassador beam : “There’s 24 categories at the Oscars,” he said. “There are Brits in 21 of them.”

Much-discussed non-nominee Idris Elba seemed happy just to be in the conversation even if his name is not in any winning envelope. He was spotted taking selfies with the British nominees. 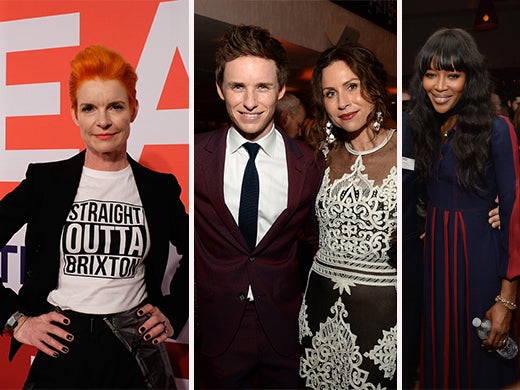 “The Only Other Irish Jew in the Room” 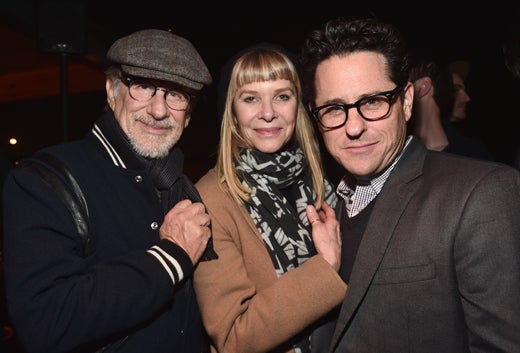 “Room” director Lenny Abrahamson got a facial caress from James Corden (below), but his biggest prize may have been some slick verbal branding from host J.J. Abrams at the Oscar Wilde Awards at Abrams’ Bad Robot offices on Thursday night. 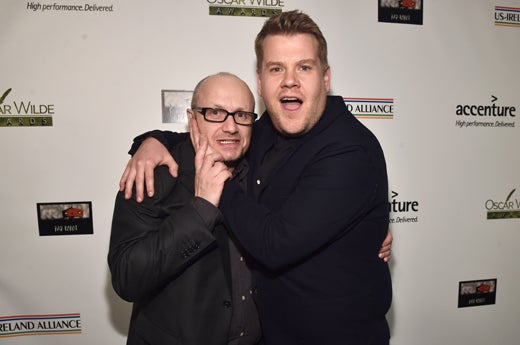 Abrams called abrahamson the only other Irish Jew in the room. Abrams has touched the island recently, shooting the final scene of “Star Wars: The Force Awakens” in Ireland. 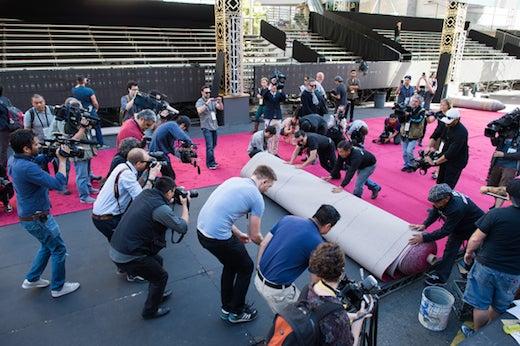 Photographers outnumber carpet unrollers  by a count of 30 to 3 at the home of the Oscars on Wednesday, February 24. (A.M.P.A.S.)

Just like every other construction site, here are three guys working, and 30 standing around watching. 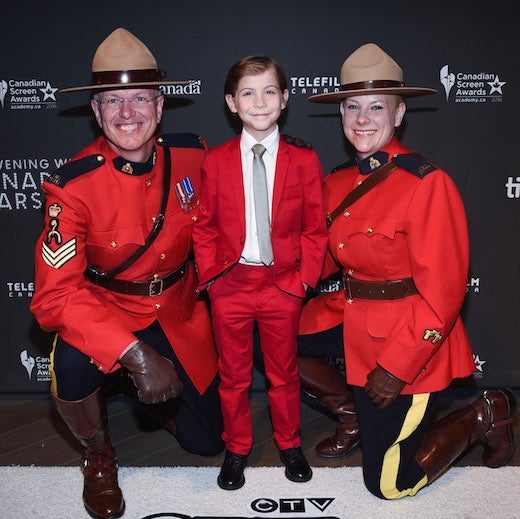 Three of Canada’s big stars at  “An Evening with Canada’s Stars” at the Four Seasons on Thursday.  (George Pimentel)

“Room’s” Jacob Tremblay outfitted in patriotic Canadian red, met the Mounties, and was ready to shoot a “Visit Canada” commercial on Thursday.

Half security, half photo prop, Mounties posed with Emmanuelle Chriqui and “Suicide Squad” actor Adam Beach at the Canadian Consulate and Telefilm’s toast to their nationals affiliated with 21 Academy Award nominations.

The Emmys and Golden Globes Come to Oscar Week 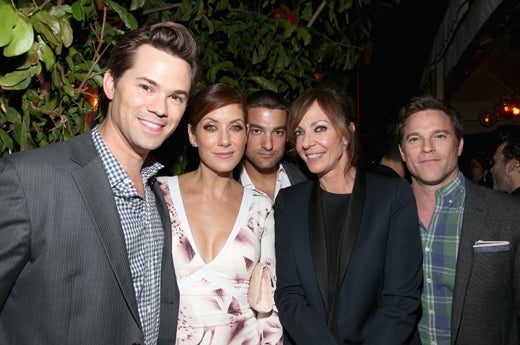 As “Modern Family” boss Steve Levitan grabbed host Michael Patrick for a greeting at Cadillac’s Oscar celebration at the Chateau on Thursday night, a look around the room demonstrated the demographic of power players who get to enjoy all the rewards of Oscars week without the burdens of a 12-hour awards day at the end. 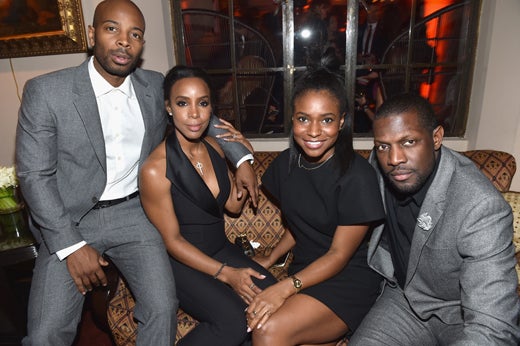 Kelly Rowland perched with her crew on a couch in the library (above), while “Modern Family” co-stars Jesse Tyler Ferguson and Ty Burrell hung tight (below).

“Girls”” Andrew Rannells, Kate Walsh, and Allison Janney buddied up as Prince and “Push It” flowed from DJ Michelle Pesce in the corner, while former Oscars producer Adam Shankman cut through the crowd. 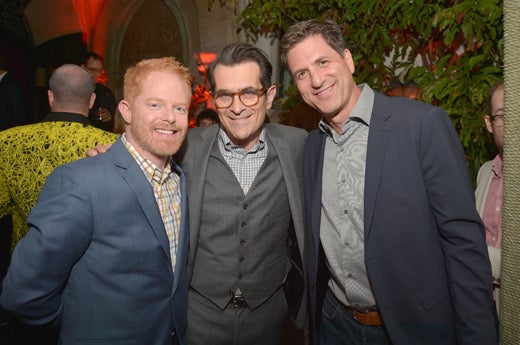 Besides #TeamTV getting a taste of Oscar week, the Golden Globes are stepping in as well. HFPA President Lorenzo Soria and wife Lilla Pausits told TheWrap at an earlier Chateau shindig this week that they are attending the Oscars for the first time.

Producer Jeff Rice, talent rep Lewis Kay (who after 19 years at PMK*BNC just launched new firm Kovert Creative), and Andy Gelb (on the rare social night out before captaining the Vanity Fair Oscar Party carpet on Sunday night) added to the roll of industry bigshots and bosses that Patrick’s parties are known for.

In a rare sight, the Academy’s actual “Oscars” branding appeared on the step-and-repeat in the Chateau driveway, a blessing for their official partner’s party.

More than a handful of those Caddys shuttling VIPs ended up in the crowded corner parking lot of new Thursday hotspot “Adults Only,” the-hidden-in-a-strip-mall cocktail bar tucked behind a retro adult video store. 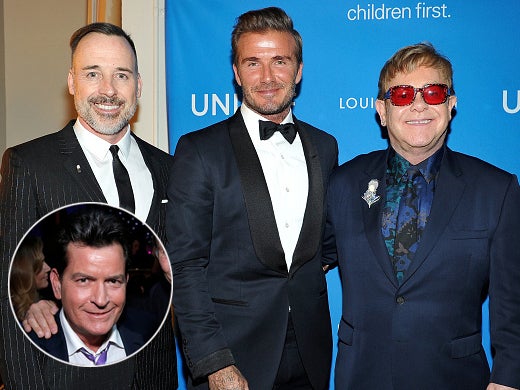 David Furnish and Elton John honored pal David Beckham at a UNICEF event. This week, Furnish, the chairman of the Elton John AIDS Foundation, spoke to TheWrap about the prospect of Charlie Sheen joining the fundraiser. (Getty Images)

After Charlie Sheen‘s announcement that he is HIV-positive, many wonder if he will join in Elton John‘s celebrity-packed Oscar-night fundraiser for his AIDS charity.

“You never know who’s going to walk though the door,” Elton John AIDS Foundation Chairman David Furnish told TheWrap as the party loaded in around him in West Hollywood Park on Thursday. “You never know. There’s always a surprise on the night. If Charlie walked through the door, I would give him the biggest hug. It would be great.”

“We’ve all been talking, internally and between friends. Elton in particular has a close relationship with (“Today Show” anchor) Matt Lauer, and Matt did the [announcement] interview with Charlie. Don’t know Charlie personally, but really admire his courage and bravery to stand up.”

With or without Sheen, other pals like Steven Tyler (who has auctioned a seat at his table and a stay at his Hawaiian retreat in the past to goose the night’s tally), and collaborations with Lalique and BVLGARI will help raise the money that ends up going to AIDS-related action groups around the world. 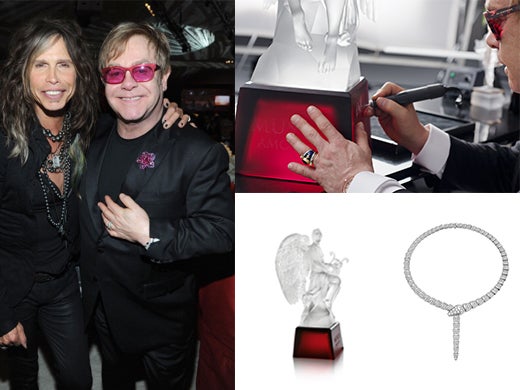 Tyler has often kicked in items for the auction that ends the night. At top right, Elton signs a one-of-a-kind Lalique sculpture he designed for this year called “Music is Love” made from a now-destroyed wax mold, so no more can be made. At bottom right, BVLGARI is bringing in a Serpenti necklace and two high end watches for the bidders.

“Elton John is a close friend of the brand, a collector of glass products” Lalique CEO Maz Zouhari told TheWrap, adding that the collaboration came together quickly. “From the first meeting we immediately had a firm idea of what we wanted to achieve. The angel symbolizes love, which drives and inspires Elton John AIDS Foundation.”