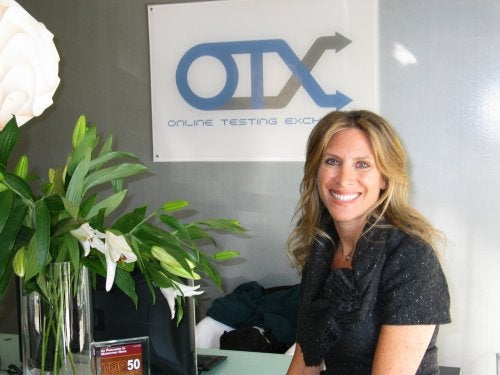 Why sell your company?

I don’t look at it as selling it, I look at it as taking care of my baby as it goes through stages. It got to the point where we had to go global. We have global clients. The time was right to find a home that understood us.

Online research was once mocked as unscientific. Is it still?

At the time I built it there was no word called online research — it was the internet. It was a dream to move research toward using technogy, but at the time there were only wealthy old men online using broadband connections. I had to really build it before people believed it, and get people to buy into a promise. Now it’s a household word, and collecting data online is the nrom

But is the research as valid as old methods?

It’s more valid than calling people at home. Most people don’t even use landlines. However, there are always certain populations that are not represented. You collect that in natural form.

How much of your business is in entertainment?

Your press release said you have $60 million in revenue?

What did you sell the company for?

It’s not being revealed.

I can’t talk about that. We haven’t finalized ebitda for 2009.

So we can presume some multiple of that. Was it a cash purchase?

I can’t reveal that.

You did this deal so you can grow globally —

I want to be with Ipsos and evolutionize research. Not only do we get to work with other unbelievable researchers in the industry, but it’s a company embracing innovation, that wants to evolve.

How might you use Ipsos research to change your products? What about research screenings?

Looking at movies today, consumers don’t consume movies in silos. We need to build simulators and new tools and we haven’t had the resources to do that. This opens a whole bunch of opportunity.

So we should watch for expansion?