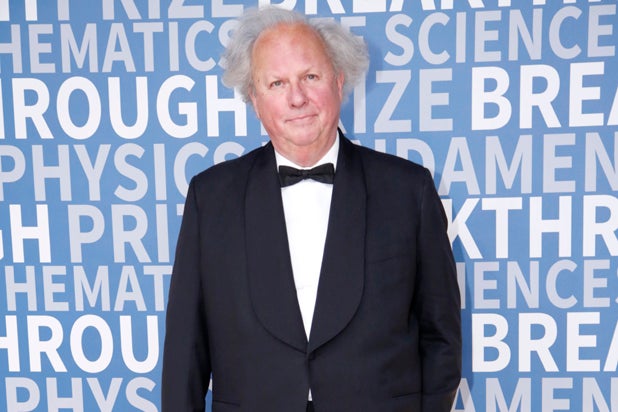 Graydon Carter announced on Tuesday he’ll be leaving his post as edor of Vany Fair at the end of the year — a posion where he frequently drew the ire of President Donald Trump.

Despe the president calling him, among other things, “dopey” and a “sissy,” appears Carter has taken the commander-in-chief’s barbs in stride. The 25-year Vanity Fair veteran said he’s even found a way to print the tweets out and make them useful.

“He’s tweeted about me 42 times, all in the negative,” Carter said the New York Times. “So I blew up all the tweets and I framed them all. They’re all on a wall — this is the only wall Trump’s built — outside my office. There’s a space left for one more tweet to complete the bottom line. So if he does, I’m just going to call our framer, and say we need one more.”

Carter’s math may be up for debate; according to “Trump Twitter Archive,” the president has “only” tweeted about the magazine chief 28 times. The Twitter lashings have been consistent well before Trump became president, though, with Trump starting his steady onslaught back in 2012.

“Can’t wait for Vanity Fair to fold which, under Graydon Carter, will be sooner rather than later,” said the president in October of 2012.

Can't wait for @VanityFair to fold which, under Graydon Carter, will be sooner rather than later.

President Trump kept the hits coming in 2013, saying Carter‘s “very dumb bosses” should fire him, and also calling out his restaurants for good measure.

And even after winning the 2016 election, Trump still wasn’t satiated. The president called Carter a “no talent” and said Vanity Fair had “really poor numbers.” (Apparently the then president-elect was combing through Vanity Fair’s Google Analytics.)

Carter told the Times Trump should be happy to see him step down — and that he’d be wise to hold back on one final Twitter bashing.

“It should be a little bright spot in his administration,” said Carter. “And if he’s smart, he won’t say anything.”