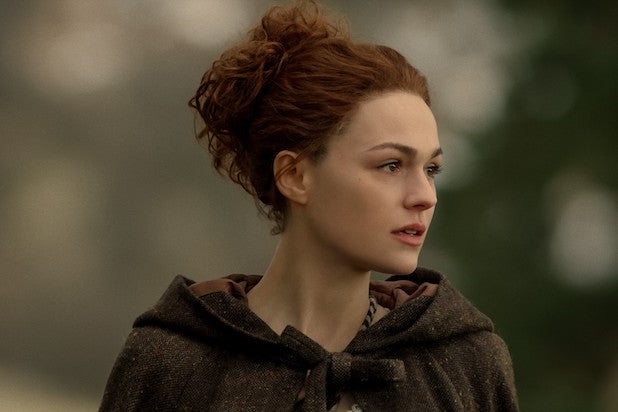 (Warning: This post contains spoilers for Sunday’s episode of Season 4 of “Outlander.”)

“Outlander” aired a warning before an episode Sunday in which a character was raped offscreen, because the drama’s creators wanted to be sensitive to viewers and the character who was raped, Jamie and Claire’s daughter Brianna.

In the episode entitled “Wilmington,” Brianna (Sophie Skelton) married Roger, but was then raped by Stephen Bonnet. Starz aired and tweeted a warning before the broadcast that read “VIEWER DISCRETION: Tonight’s episode is suitable for mature audiences only and includes portrayal of sexual violence.”

After the episode, the “Outlander” Twitter account also shared the number for the National Sexual Assault Hotline.

“There is a lot of rape in Diana [Gabaldon]’s books,” executive producer Maril Davis told Entertainment Weekly. “Obviously we’ve seen some of it and every time we try to figure out what is best for the story. We certainly want to be sensitive to the character who is going through this situation. We knew from the outset that we wanted to [have the rape occur off-screen]. We’re in the room with her at the beginning. Sophie did such an amazing job. It’s just a heart-breaking moment.”

“It’s still horrible,” Davis added. “When we approach a story, we want to see it in that time. The fact is, it happened quite a bit. We wanted to show how no one did anything and what a horrible thing that was. All of these people knew it was going on and did nothing to help … what it said about that society and how Brianna, as a single woman, was unattended and unaware and put in this situation. No one helped her. How tragic that was!”