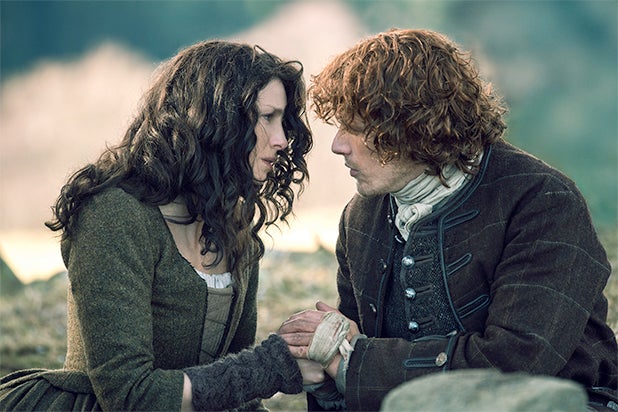 (Spoiler Alert: Please do not read until you have watched Saturday’s season finale episode of “Outlander.”)

Another season of “Outlander” has come to an end, and “Dragonfly in Amber” not only finally introduced fan-favorite characters Roger and Brianna, it also perfectly brought the love story of Jamie and Claire full circle.

As the show finally jumped to 1968 and simultaneously brought us to the point in the season premiere which showed Claire (Caitriona Balfe) crying alone on a road in the 1940s, the supersized 90-minute episode was packed with all the introductions, battles and reunions that fans have been waiting for.

Let’s take a look at some of “Dragonfly in Amber’s” biggest moments and revelations:

When Roger Met Brianna
After keeping their appearance under wraps the whole season, “Dragonfly in Amber” got right down to the business of introducing Brianna Randall and Roger Wakefield, opening on a shot of Roger’s stricken face in 1968. Within a few minutes, he’s taken by the sight of a beautiful redhead, and sparks are immediate upon their introduction at Roger’s father’s funeral.

Soon, Roger and Brianna are off to see the wild, beautiful Scottish countryside on their own as the flirting and connecting kicks up a notch.

Being history buffs, they can’t help but dig into their own pasts, and soon uncover the three years when Claire disappeared from Frank’s side, and her return conveniently six months before Brianna was born.

Claire’s Ghosts
Meanwhile, an aged Claire wanders off into the Scottish countryside alone, and with a very specific agenda – visiting places she had been with Jamie, back in the 18th Century. Ultimately, she finds the Fraser familial grave marker and finally unloads everything on Jamie, telling him about Brianna and her life for the past 20 years.

When Brianna confronts her mother about what she believes was an infidelity that led to her birth, Claire finally tells her daughter the truth, too. But the thoroughly modern young woman is understandably skeptical, to say the least.

One Last Battle
Back in 1746, the day the Battle of Colludon is about to begin, Claire comes up with one last-ditch effort to stop it and change history. She suggests poisoning Charles before the battle begins, since everything begins and ends with him.

Unfortunately, Dougal overhears the plan, forcing Jamie to kill his uncle and longtime ally, and become a doomed man himself.

As the battle looms, Jamie insists Claire and their unborn child go back to the 1940s where her husband there, Frank, will take care of them. The star-crossed lovers say goodbye one last time in front of the supernatural rocks that brought them together, and go their separate ways — her back to the future from whence she came, and him back to Colludon to die on the battlefield.

Back to the Start
While still at odds, Claire and Brianna — along with Roger the mediator — must work together when they come across a certain Gillian Edgars, a dead-ringer for Claire’s friend from the 18th Century, Geillis Duncan, who of course is another time-displaced modern woman who traveled to the past.

But Gillian’s time travel turns out to be very deliberate, and as Claire, Brianna and Roger race to Craigh na Dun to stop her, knowing her fate ends in being burned at the stake as a witch, the truth becomes undeniable at last.

But as Brianna comes to grips with her mother’s crazy time-traveling story and her own origins, Claire gets a shock of her own when Roger reveals James Fraser didn’t die on the field in the Battle of Colludon, leading Claire to one final, inevitable revelation — she has to go back.

Yes, Jamie and Claire are on the path to another reunion, and luckily their story is far from over, as Starz has already renewed “Outlander” for Seasons 3 and 4. Who’s ready for “Voyager”?