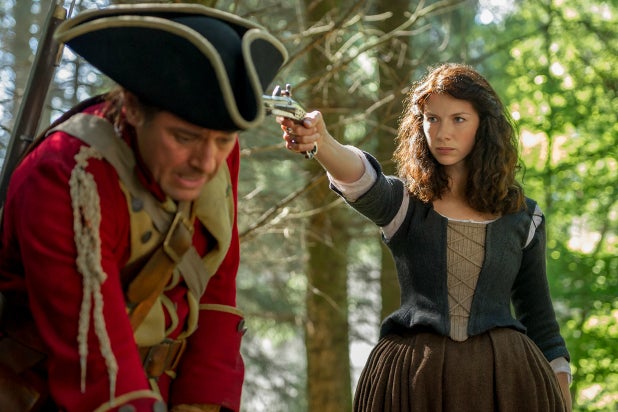 “Outlander” has returned to save Saturday night boredom for (mostly) females everywhere — and it delivered a solid Nielsen number for Starz in the process.

Saturday’s episode delivered the second-highest female viewership of any original Starz episode ever, bringing in more than 760,000 women 18 , behind just the show’s recent midseason finale (887,000).

Saturday’s “Outlander” was up against the NCAA Men’s Basketball semifinal, Kentucky vs. Wisconsin, but it’s unclear how much crossover audience the two programs share.

“Outlander” trended on Facebook this time for more than 12 hours, and on Twitter during its airing. According to Nielsen, The Sam Heughan-Caitriona Balfe series ranked No. 2 in Twitter conversation volume among all Saturday television series.

Live 7 Day ratings and multiplatform performance will be distributed when available. The first half of the “Outlander” season averaged 5.1 million viewers across multiple platforms.